Two female students, a team from Manhasset High School, were catapulted into stardom last Tuesday, Dec. 8, after the Siemens Corporation announced the winners of the 2015 Siemens Competition in Math, Science & Technology. The team of Kimberly Te and Christine Yoo, seniors at Manhasset High School, and Maria Elena Grimmett, a senior at Oxbridge Academy of the Palm Beaches, Florida were awarded grand prizes of $100,000 each for their significant research in the competition. The competition provides a scholarship to an individual winner as well as a team. The winners were selected from a pool of nearly 1,800 project submissions.

The team engineered a device made of natural, sustainable materials that cleans up oil-polluted areas and uses the otherwise unusable oil to generate clean energy to power remote sensors. Te and Yoo had previously studied the biological effects of pollution on organisms and wanted to focus their research on cleaning up pollutants, specifically oil. They devised an efficient and cost-effective device that could degrade hydrocarbons, while also producing electricity—using a loofah sponge.

Competition judge Dr. John Regan, a civil and engineering professor at The Pennsylvania State University, said of the winners, ”They tackled a challenging subject by taking a common material that many of us see and use at home every day and incorporated a fresh, innovative approach to its functionality. The result was an unexpected application—for the use in environmental cleanup—that not only is more cost-effective than what is currently being used today, but also allows a higher power density. The level of independent work and creativity required to initiate this type of project is distinctive and impressive.”

Manhasset Superintendent of Schools Charles Cardillo said, “Christine and Kimberly embody the true spirit of Manhasset in achieving excellence by attaining this most extraordinary accomplishment of national winners of the very prestigious Siemens Competition in Math, Science & Technology. Their success should serve as an inspiration to the students at Munsey Park, Shelter Rock, the Middle School and the High School that you can dream big and work incredibly hard to reach a lofty goal.”

Te serves as the project team lead. She hopes to help create new green energy technologies and find ways to sustain the earth. She aspires to pursue a career in environmental engineering and currently has a patent pending for a sustainable, cost-effective microbial fuel cell designed for energy production and oil spill remediation.

Yoo has previously been a national finalist for the Chemistry Olympiad and a finalist for the International Science and Engineering Fair. The team is mentored by their science research educators, Peter Guastella and Alison Huengar, at Manhasset High School.

“Christine’s and Kimberly’s love for Manhasset High School is very evident when they talked with great enthusiasm and pride about doing their research work, ‘all completely in the high school lab by ourselves’ (and with the support of their science research teacher, Allison Huenger) developing the design and testing it out,” said Cardillo.

“The entire school community is so proud of the two high achieving students,” said Principal Dean Schlanger about the incredible achievement.

“Everyone on staff throughout the entire school district, plus the entire Manhasset community, should feel great pride in the accomplishment of Christine and Kimberly, as this truly is a very special Manhasset moment for two very special young ladies,” said Cardillo.

Grimmett, the individual winner, impressed judges with her project titled, Adsorption of Sulfamethazine from Environmentally Relevant Aqueous Matrices onto Hypercrosslinked Adsorbent MN250. She found a new method to remove sulfamethazine, a commonly used veterinary antibiotic which is a contaminate damaging both soil and the aquatic ecosystem. Grimmett’s method utilized small plastic beads which could be reused, applied at scale and implemented using a delivery system already in place for treating drinking water. She first became interested in her topic because she wanted to know why well water was brown.

The winners have received national recognition and are being recognized by many elected officials as well as the community as high achievers.

“Congratulations to Maria Elena, Kimberly and Christine. These three young women have demonstrated an incredible commitment to the advancement of science, math and technology as well as a resolve to tackle some of our world’s most challenging environmental issues,” stated David Etzwiler, CEO of Siemens Foundation. 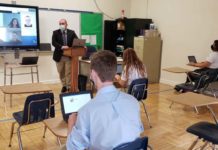