It is with great sadness that we inform the community of the untimely passing of our beloved Mayor Robert McNamara on Wednesday, April 15.

Mayor McNamara was elected as a Village Trustee in the beginning of April 2012 after serving as a member of the Architectural Review Committee. He was appointed Deputy Mayor in 2013 serving under Former Mayor Elaine Phillips. He was appointed by the Board of Trustees to become Mayor in 2016, replacing outgoing Mayor Elaine Phillips as she assumed her State Senate seat. Bob was elected Mayor in 2017 and was instrumental in making Flower Hill the first-class village it is today.

He led the Village through the ongoing building boom and was the leader behind instituting building impact fees to protect residents from the negative effects of large construction in their neighborhoods. Bob’s strong financial leadership kept Village taxes flat despite increasing operating costs across the board. Under Mayor McNamara’s leadership the Village is well on its way to acquiring Middle Neck Road from the County after spending years fighting for much needed repairs. The Mayor’s accomplishments large and small will be realized for decades to come.

“We lost a dear friend and community advocate today. Bob was an exceptional and respected man who was dedicated to our Village up until the very end. He touched so many lives throughout our community. He always made himself available and could frequently be found driving around “just checking things out” as he liked to say. He touched the hearts of so many and will be missed by all. You can just be a mayor or you can be The Mayor, Bob was always “The Mayor” said Deputy Mayor Brian Herrington.

The Mayor leaves behind his loving wife Ginny and their three children Susan, Keith and Tim. He will be deeply missed by his fellow Board members, staff and fellow Mayors but will always be fondly remembered. After the current public health crisis has ended the Village will be working with the McNamara Family on a community celebration of his life.

-Submitted by the village of Flower Hill

Editors Note: Anton Media Group will be updating this story shortly as more information is provided. 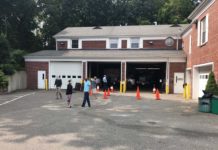