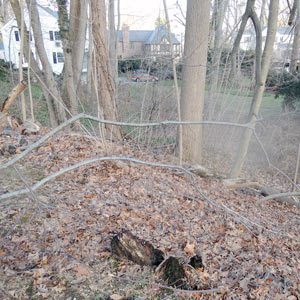 Basketball hoops were a hot topic in Munsey Park last week after a resident was denied a permit to erect a permanent hoop on the street . NBC, CBS and Newsday all sent reporters to cover the story. Village law—in place since before 2000—prohibits permanent structures on the street.

Front yard basketball courts, fountains, statuary, foot bridges, aluminum or plastic awnings or other unnecessary or unrelated ornamentation is not permitted without special application to and written approval of the Board.

In October 2001, the code was amended, adding the following:

Basketball hoops and poles in a front yard require permission of the Board of Trustees.

Permission will be given automatically when they are attached to the front of the garage or when the pole is placed in the front of and next to the garage. Should an impediment, such as a dormer window or glass window or glass window in the garage door, prevent such placement, then permission will be granted for placement on whatever side of the driveway will tend to limit, because of distance, elevation, shrubbery or other similar condition, the likelihood of a basketball hitting a neighbor’s home.

Now, in the aftermath of this latest brouhaha, the trustees will vote to add the following to the code:

Other locations in the front yard or driveway will be considered by the Board of Trustees with an aim of reducing the likelihood of a basketball hitting a neighbor’s home. Under no circumstances may a basketball hoop be placed in the Village right of way.

In the Village of Munsey Park’s regular December meeting, Patrick Hance proposed this code change to “close the loophole,” so to speak, according to Munsey Park Mayor Frank DeMento. Many longtime Munsey Park residents are disturbed that new homeowners are not aware of the codes when they move in. According to the mayor, the revision must be voted on during the February board meeting.

The February meeting will also include discussion of sub-dividing a lot at the corner of Manhasset Woods Road and Bellows Lane which is also a hot topic. The former Daley residence was recently sold but it had a buildable lot which is held in trust by the Daley estate.

Residents were concerned that DJD Holdings LLC’s application for subdividing the property, which once belonged to former Munsey Park Mayor William Daley, would lead to two houses that could go unsold, present safety hazards for surrounding dwellings and violate the village’s design aesthetics.

The application, presented to the board by lawyer Michael Sahn, calls for the half-acre lot to be split into 10,757-square-foot parcels for the building of two colonial homes.

Sale of the property to DJD Holdings by the Daley family trust, established in 2007, is contingent upon approval. The trust was represented by Mary Bennett, Daley’s daughter, as well as its counsel, James Margolin. The application is still in its early stages and plans for the houses have not even been drawn.

Griffith also presented the board with a petition calling for the rejection of DJD Holdings’ application that he said received more than 300 signatures from current and former residents, as well as others living in the greater Manhasset community. 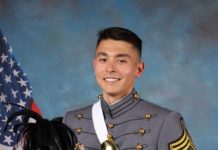 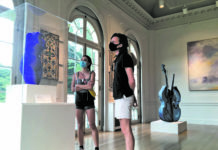