In a nation that constantly battles with weight problems and even obesity, weight-loss programs can gain plenty of attention. Dr. Shawn Garber was at the New York Bariatric Group office in Roslyn Heights last week to demonstrate the new weight-loss procedure, ReShape Duo.

“The results I saw firsthand with the intragastric balloon were quite impressive,” Garber told The Manhasset Press. “I removed a balloon on a woman that lost 65 pounds during the six months the balloon was in. We are very excited to be one of the first practices in the U.S. that will be offering this nonsurgical procedure.”

When trying to lose weight, dieting is probably the best option, even though people still use diet pills. But if both are unsuccessful, then ReShape Duo represents an alternative.

ReShape is, to say the least, an innovative process. Garber describes it as an intragastric balloon that, used along with a managed weight-loss program, can help people who need to lose 20 to 30 pounds.

ReShape Duo is now FDA-approved in the United States and Garber is one of the first physicians in the country to perform the nonsurgical procedure.

Garber was trained for the procedure in Brazil. He was the first American physician to take part in such a program.

“The training in Brazil was an amazing learning experience,” Garber said. “We were able to learn from some of the world’s experts on intragastric balloons and were able to actually place and remove balloons during the training. We are very excited to be one of the first practices in the United States that will be offering this nonsurgical procedure.”

Garber is founder and director of New York Bariatric Group. Recently, he held group demonstrations at the Mineola Avenue office, an event that kept him nearly the entire day.

Garber said that the device is two soft-connected, silicone intragastric balloons inserted nonsurgically in a deflated state into the stomach.

After that, Garber added, the balloons are inflated with sterile saline solution through a self-sealing valve. The balloons, he said, will remain in place for a maximum of six months. During that period, the patient will enjoy a feeling of fullness sooner, plus a satiety that will last longer after meals. Such a feeling, he said, will help manage hunger.

The entire program lasts for one year. During that time period, the patient, Garber added, will participate in a support program that provides a personalized diet designed to retrain the patient’s eating habits, individual exercise series and a one-on-one motivational program including individual goal-setting and tracking meetings.

For information or to schedule an appointment, call 800-633-8446 or visit www.stopobesityforlife.com. 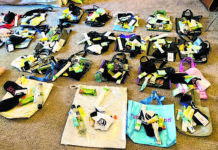