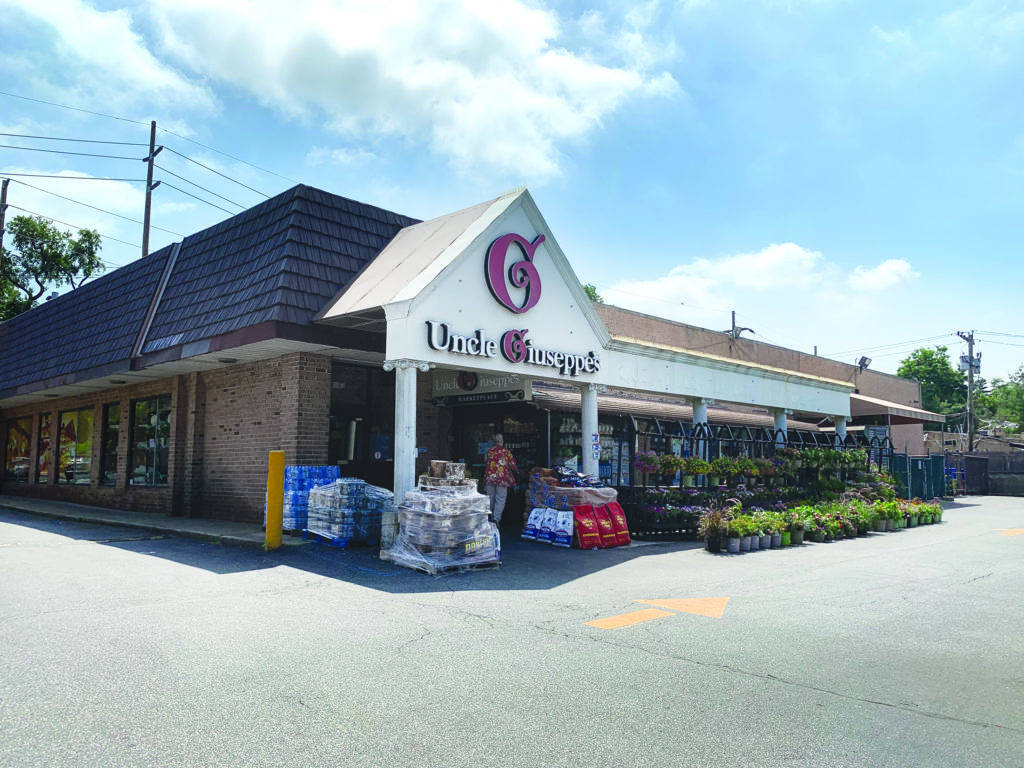 The Port location, which opened in March of 2006, is one of seven locations, with the others in East Meadow, Smithtown, Port Jefferson, Massapequa, Melville and Ramsey, NJ. The Port’s store is one of the marketplace’s smaller sites.

Uncle Giuseppe’s owns the lot in which it sits, along with the Port Washington Wine & Liquor store, Salem Drugs and a third vacant storefront, under Port Washington Center, LLC.

“The current plan is to demolish 9,500-square-feet of existing tenant space on the northeast of the property and repurpose that area into parking, then extend the existing building on the southeast by 10,000-square-feet towards the west, space that is currently parking area now,” said Director of Facilities and Construction for Uncle Giuseppe’s Nick Stripp.

Stripp explained the expansion is necessary to enhance the shopping experience at the company’s Port location.

“The existing space is substantially smaller than our other stores, which limits our ability to offer the same customer experiences that have become a signature of Uncle Giuseppe’s brand with various specialty departments: bakery, fresh mozzarella prep room, international cheese department, gelato, handmade chocolates and candies to name a few,” said Stripp.

In the front half of the new building, Uncle Giuseppe’s originally planned to add a mezzanine to make a café, but they decided to make a mezzanine for an employee lounge and offices.

About 500 feet of the back portion of the new building will be a loading dock, which the location currently does not have, causing trucks to load in front of the door and requiring staff to carry items off the trucks. The dock will cut down on noise from deliveries and Uncle Giuseppe’s will fix the current issue of trucks backing up onto Port Washington Boulevard.

Stripp explained Uncle Giuseppe’s Marketplace did a traffic/parking analysis based on town codes and compared the anticipated traffic impacts to their other stores as part of their submission package for the town, which has not been submitted yet. Uncle Giuseppe’s completed auto-turn simulations at the proposed site for regular passenger vehicles, delivery trucks and other vehicles, such as fire trucks.

“The expansion includes a fully finished wall separating a sealed trash compactor away from neighbors, all new lighting that will prevent light from spilling into nearby properties and additional guardrails around the parking lot for safety, as well as countless other improvements to benefit the local residents,” said Stripp.

He furthered that the entire building would be renovated and brought up to current ADA standards, as the current building was grandfathered in to previous standards.

Uncle Giuseppe’s would also provide new landscaping, including dwarf Japanese holly along Port Washington Boulevard and Norway spruce along Marino Avenue, carpet roses and arborvitae along 11 Marino Ave.’s property to cover the new concrete wall and block the building from view. Stripp explained that the entire building will have a finished look, with much of it including crown molding.

“We are working through the application process and still finalizing the plans based on recent feedback. We do not have any dates set for applications just yet,” said Stripp. “Once the application has been submitted, it will be fully available to the public.”

However, while the meeting was planned for an expansion presentation, De Giorgio explained the meeting ended up focusing on the lawsuit between Salem Drugs and Uncle Giuseppe’s.

“Unfortunately, Uncle Giuseppe’s didn’t get the opportunity to present the plan and started taking public comment before they presented the plan,” said De Giorgio. “The architect didn’t speak and the traffic engineer didn’t speak. Only the attorney spoke. None of the design professionals had an opportunity to speak about the design. People were shouting. There were people talking at once. I’m disappointed they didn’t share the plan. I think the community needs to be informed, and to the extent that they didn’t, that’s going to be an issue I think.”

When asked if De Giorgio would approve the application if the current plan were to come before the board, De Giorgio said, “It would depend on the feedback from the community and they didn’t get any, so it would be tough to say.”

According to some of the plans proposed by Uncle Giuseppe’s, Salem Drugs and Port Washington Wine & Liquor would be knocked down in order to make space for 20 parking spots.

“Uncle Giuseppe’s has expanded its usable space by occupying and building out into some common areas, which would then increase their rentable footage,” said Dean Lakis, an attorney representing Salem Drugs. “That would increase the landlord’s square footage, which, in our opinion, in the calculation would reduce my client’s portion of the taxes.”

According to Lakis, Uncle Giuseppe’s and Salem Drugs have recently come to a tentative settlement that would see a reduced payment of the $60,000 initially sought after and a year-long lease. Salem Drugs was previously under a month-to-month lease with Uncle Giuseppe’s.

“Uncle Giuseppe’s refused to give us a lease extension based upon their plan to expand,” said Lakis. “The fact that [the owner] was left without a lease was something that he was not happy with, but as a matter of law, that’s the landlord’s right. They came into court offering that extension, which was something that was not on the table before…I don’t think [Uncle Giuseppe’s] are going to be able to build anything within a year, if at all.”

The petition currently has 17 signatures with a goal of 100 and it can be found at www.change.org/p/town-of-north-hempstead-help-stop-the-expansion-of-uncle-giuseppe-s-port-washington.