Romance novels are typically what you find at Manhasset Public Library, but true love was in the air when Manhasset resident Parsa Scarifi proposed with a little help from the Manhasset library staff on Thursday, July 13. More than just Scarifi’s 28th birthday, it was the day he changed his life by asking Alex Hand for her hand in marriage.

Scarifi grew up in Manhasset and attended Manhasset schools beginning at Munsey Park Elementary School and graduating with the Class of 2007 at Manhasset High School. The Manhasset Public Library was more than just a place he went to, it was the place that this love story began.

Scarifi was attending college and needed help with math. He had met Hand at a gym according to Hand’s mother, Maggie. The bride-to-be grew up in Port Washington and attended Daly Elementary School, Weber Middle School and graduated from Paul D. Schrieber High School in 2009. She had attended Muhlenberg College and was working nearby as a tutor.

They set up their first session at Manhasset Public Library and the sessions spanned a number of weeks. The tutoring worked and Scarifi passed the class. He wanted to pay Hand for her efforts, but she politely declined and suggested perhaps they could go on a date. He obliged.

On their first date, Scarifi bought Hand a single white rose rimmed with red from Olive Duntley’s Florist on Plandome Road and the rest is history. The couple dated for three years and Hand had no idea he would propose, but the families knew. All were gathered in the lounge watching and waiting for Scarifi to formally pronounce his love for Hand with a ring. 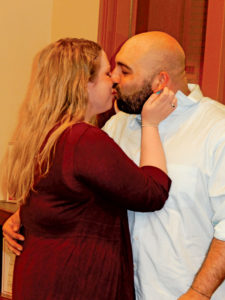 He went down on one knee and asked. The happy couple was showered with a flurry of silk rose petals.

“We make each other better people,” said Scarifi.

The couple called family members who weren’t there about the momentous news. “I didn’t understand why he wanted me to get my nails done,” Hand said afterwards. “He doesn’t care about that.”

“It is true love in the stacks,” said Quinn.