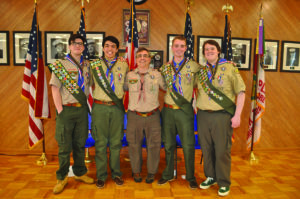 Fellow Scouts, family, friends, leaders, Boy Scout of America representatives, elected officials, representatives from American Legion Manhasset Post 304 and other dignitaries and guests filled the meeting room at Manhasset-Lakeville Fire Department Company two to celebrate these young men for earning Boy Scouting’s highest honor and offer their insights on the award’s importance to their futures and society. Among them was State Assemblyman Anthony D’Urso and Patricia O’Brien, president of the Post 304 Women’s Auxiliary, who awarded each Eagle a special citation after heartfelt remarks about the youths and impact of their contributions.
The event opened with a video of the Scouts spanning their years in Cub Scouting, joining the Troop, high adventure and other trips and Eagle service projects. Always the most touching part of the ceremony was when each honoree’s mother pinned the Eagle rank onto their son, followed by the Scout’s pinning their siblings and bestowing the Eagle mom and dad pins. After acknowledging the Eagle Oath and Charge, the honorees remarked on their trail to Eagle and what Scouting means to them, offered advice to their Scout brothers, presented their Mentor pins and thanked all those who assisted them with their Eagle Service Projects:
Simone cleared, cleaned, organized and lighted the archival attic at the Sands-Willets Historical House; Wiebe created a Veterans Memorial Garden at Roslyn Harbor Village Hall dedicated at the exact 100th anniversary of the end of WWI; Bossé removed the old dilapidated storage and built 108 new rower cubby units at Port Rowing; and O’Brien transformed a shed for the Cow Neck Historical Society into a vintage general store. A lunch reception hosted by the Eagle Scout parents topped off the wonderful event. Congratulations to the community’s newest Eagle Scouts.