Ryder Road is usually a quiet, flat road in the Village of Munsey Park throughout the year. On Halloween, it’s quite a different story.

“It’s absolutely mobbed, it looks like a riot,” said John Vricella, a resident that has lived on the corner of Ryder Road for the last 43 years.

Vricella is one of almost a dozen residents on Ryder Road that were reached for comment, but he was the only one willing to go on-record.

“Ryder Road has really taken off, it has become a lot more than Halloween,” Vricella said. “It has become almost a block party where the parents take part as well. It’s very concentrated here, but what has made it even more intense is the people that come off the train from other communities. That adds to the density, it becomes a safety question. They have to block off the street, which never used to happen.” 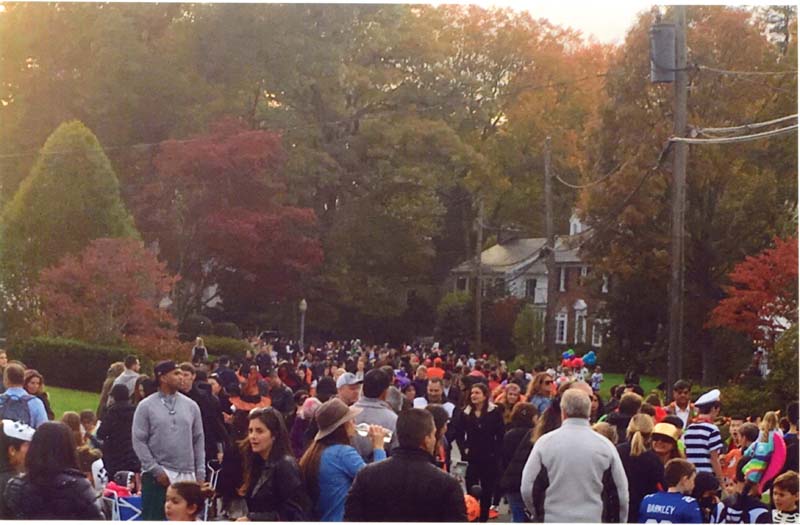 The Village of Munsey Park says they plan on blocking off the road again this year. They also sent out a newsletter about the Ryder Road festivities on Halloween.

“The board of trustees wishes to urge residents (especially those with small children) to be safe,” the newsletter from the Village of Munsey Park said. “Nightfall comes earlier at that time of the year and it is often difficult for drivers to see those in dark costumes. In planning your activities on that day, please bear this in mind. In addition, we have noticed (as we are sure that you have) that large crowds gather on Ryder Road. At first, this was charming. But in the last few years, the crowds have increased beyond the point of it being fun and it is a growing concern in the community. The situation is exacerbated by the fact that large groups visit us from outside Munsey Park. While we welcome all to our community, unfortunately, the large crowds come with heavy traffic increasing the chances of injury on our narrow roads. While the activities on Ryder Road are not sponsored or encouraged by the village, we will continue to monitor the situation. We urge all residents and visitors to avoid Ryder Road and trick or treat on Munsey Park’s other beautiful streets. We are sure that you will find many treats on these other streets.”

As Vricella stated before, a lot of the trick-or-treaters are coming from out of town. One resident found Facebook pages and websites that advertised Ryder Road as a hot spot for Halloween. This resident was successful in getting these page shut down as they were not sponsored by anyone that lives on Ryder Road or by the village.

Vricella said he had a couple lights knocked out a few years back, but he is not worried about his own safety, rather the small children that walk up his stone steps to his front door for candy.

“We worry about the very young children who go up the steps unaccompanied and that they might fall because of the costumes not being as safe as they should be,” Vricella said after taking a break from mowing his front yard on a Sunday afternoon. “I rather it be like it was, neighborhood trick-or-treating rather than people taking the train here. It would nice if it was a little bit more local and low-key. It would be safer, it would be safer for the children. They are having fun, I understand that, but it becomes a question of safety.”

Vricella said that he buys about 600 pieces of candy for the occasion and puts a sign out when he runs out of candy. Another family said they buy 2,000 to 2,500 pieces of candy and have four people manning the front door to hand out the candy.

From Manhasset Woods Road to Ridge Crescent, a large crowd is still expected to frolic onto Ryder Road for Halloween this year, whether they are wanted or not.