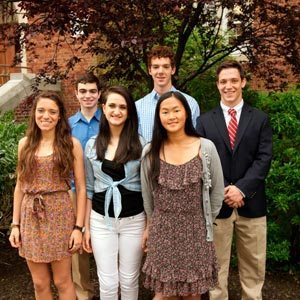 Since 1953, it has been a tradition for the Manhasset School Community Association (SCA) to award financial grants to Manhasset High School juniors who wish to participate in a study enrichment program of their choice, during the summer between their junior and senior years.

The following provides a brief summary of their respective summer study program and gained experiences:

Her desire to continue to study art in college guided Alice Donnelly to graciously and respectfully request the committee’s consideration to award her a summer study financial grant. She enthusiastically explained her ambition to spend four weeks attending classes such as “Sequence Art,” “Comic Book Design,” “Foundation Art,” “Art History” and “Portfolio Development” at the Pre-College Summer Program offered by Pratt Institute in Brooklyn, NY. There, Alice experienced what a college freshmen would study, spending time at lectures, as well as working hands-on in the art classes. In addition to spending time in class settings, she also participated in an out-of-class project, where she collaborated with writing students to create a comic book. “Working with writers really showed me what it would be like to do this as an animator in the future,” she said. At the end of her summer program, her work was shown in a gallery. She not only improved her art skills, but earned college credit.

A keen interest in the built world and a high regard for how to improve it propelled Daniel Gershkowitz to impress the interviewing committee with his determination and will to succeed. He expressed a sincere yearning to further his understanding of the engineering world, which brought him to attend Bucknell University’s “Summer Engineering Program” in Lewisburg, PA. During the weeklong study program, he attended over 15 classes in which his knowledge and love of the discipline of engineering was fostered by learning from numerous professors and engineering students. Daniel realized his summer study achievements by acknowledging, “It was an amazing overall experience, as I was able to learn about topics ranging from nanotechnology to earthquake analysis. I realized that I don’t only love civil engineering, but I love engineering as a whole. I could easily see myself being a civil engineer, chemical engineer or even mechanical engineer.” He is very excited about his future and is looking forward to being a full-time engineering student in college.

Seeking the freedom to learn from a diverse metropolitan community of wordly scholars, Grace Halio, an accomplished academic scholar, eloquently expressed her desire to spend four weeks attending the “Summer in the City; Pre-College Program” hosted by Barnard College of Columbia University in New York City. She chose Barnard College because, “It is a small, liberal arts women’s college with a larger research institution just steps away,” and possesses many attributes of great urban campus, where learning occurs well beyond the confines of the built environment. At Barnard, she attended classes such as “Crime & Society” and “The Psychology of Media” in response to an interest in psychology developed during her social research course as a sophomore in high school. The broad experience gained in attending collegiate level courses, exploring the city and forming memorable relationships has informed her of, “just how much of an influence my knowledge can have on the world around me.”

Diverse interests define Bryan Herbert, a well-rounded student athlete with notable accomplishments in various disciplines. He is a responsible leader, respected by his peers. Bryan welcomes new endeavors and recognizes that he is most challenged by his love of science research. His passion was clear to the award committee and it assured him a place at the IRTT Summer Program in Farmingdale, where he worked with Dr. Hazem Tawfik to design new hydrogen fuel cell catalysts. He was able study “nanomaterials,” tackle complex problems such as the energy crisis, and delve into solving problems essential to future generations. Bryan notes that, “This program exposed me to a whole new facet of science that I’d never even heard of before. My experience in designing new hydrogen fuel cell catalysts proves that even high school students can work out solutions to the most complex of problems!”

Delivering an onstage performance that speaks to her audience drives Alexia Mate as a performing artist. Her passion and resolve are evident in her enthusiasm and energy on and off the stage. Her youthful accomplishments are impressive and distinguished. She continuously works to further her craft, which is why she chose to attend Camp MSM, at the Manhattan School of Music in New York City, for one month studying musical theater and vocal performance. Valuable performance experience was gained by auditioning, rehearsing and performing two full shows in just four weeks. The recognition and confidence of playing a leading role in one of the shows afforded her the “ability to learn lines and music very quickly.” She also, “gained great experience by performing a solo at the camp concert.” Alexia expressed her gratitude for the opportunity to “expand my knowledge of music and theater, but also it really helped me prepare for my college auditions, which will be coming up soon!”

Given his determination to have a career in medicine, Stephen Tranchina pursues his dreams with a purposeful ambition. His focus, precisely tuned, well beyond his youthful age, guides his path. It also provided him with an opportunity to conduct medical research under the direction of Dr. Charles Mobbs in the Mobbs Lab at The Icahn School of Medicine at Mount Sinai Neuroscience Research Program in New York City. His compassion and direction spoke to a future of healing others with the respect of all that life has to offer. He welcomed the opportunity to spend his summer working with “doctors and researchers who are trying to develop a drug to extend lifespan.” Since he plans to attend medical school, he is, he asserts, “grateful for the support and encouragement from the SCA Summer Studies Awards committee” in helping to afford him the chance to “see how medical research is conducted because this will allow me to determine if that is the exact career within medicine that I would like to pursue.”

As a caring and compassionate person with a devout interest in the advancement of science for the betterment of humanity, Stephanie Ying displays the many characteristics needed to insure a bright future for humankind. Her academic success and personal achievements thusfar are indicative of the commitment she has to realizing her goals. Stephanie spent her summer participating in the Simons Summer Research Program (SRP), a high-school science, math and engineering research program at Stony Brook University in Stony Brook, NY. Although the program lasted seven weeks, she commuted to Stony Brook for two additional weeks to complete the last phase of her project. While there, she conducted research on HIV in the Department of Medicine under Dr. Berhane Ghebrehiwet. “The experience was extremely rewarding, not only because I was able to learn more about a field of science that I am very passionate about and work under the kindest and most intelligent mentor,” she said, “but also because of the interactions and relationships I made over the summer.”

Applicants for SCA Summer Studies Awards complete a rigorous application procedure, similar to a college application, including an autobiographical essay which describes their choice of summer study program. They are required to provide a resume of past accomplishments, two teacher recommendations and are subsequently invited for an interview with a committee of 10 people. The committee typically consists of SCA members, faculty and a community representative.