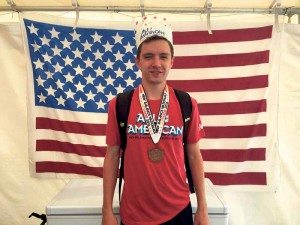 On a hot weekend this summer, as most high school students were readying their vacation plans, recent Manhasset graduate and distance running standout Tim Courts was already on an airplane headed to North Carolina, looking to culminate his stellar track career with the ultimate achievement—standing atop the podium at the New Balance Outdoor National Track & Field Championships as an All-American. The event, which is held annually at North Carolina A&T University in Greensboro, NC, brings together the best of the elite runners throughout the country to compete for six coveted All-American selections. Courts, in only his second year of competitive running, placed 6th in the 2000m Steeplechase, shattering his own school record by 11 seconds, and finishing in 6:04 to attain his season-long goal of becoming a high school All-American. While there was much joy in this achievement, his path to success did not come without considerable effort, sacrifice and the accumulated resilience that is attained through battling through and overcoming obstacles along the way.

Just one week earlier, Courts took a fall over a water barrier early in the race in the 3000m Steeplechase at the New York State Track & Field Championships in Syracuse, NY. The fall left him a conservative distance behind the pack and despite his best efforts, the performance fell far short of his expectations. Despite this disappointment, he was able to refocus his efforts and return to the track just a week later to attain this far loftier goal. This quick turnaround demonstrates the tenacity and grit he has developed through a series of both successes and failures and that which will surely continue to help propel him forward toward his future aspirations.

After finishing his fall cross country season as county champion, Courts led his team to the New York State Championships, however he struggled at the state meet, falling short in his quest to attain All-State honors. Intent on overcoming this letdown, he posted several strong performances on the track during the indoor season, only to struggle down the stretch through the postseason as he battled fatigue and failed to qualify for the state meet. Undeterred by these shortfalls, Courts continued to work diligently and set his goals high for this spring season. He ran personal bests of 1:58 (800m), 4:28 (1600m), 9:46 (3200m) and looked to be on track for a strong postseason, before a virus nearly derailed these hopes, forcing him to miss eight days and several key races leading up to the post season.

Steadfast in his pursuit, Courts managed to return in time for the Division Championships, earning All-Division honors and leading his team to a fourth consecutive division crown. The next week, he followed up with another impressive performance, earning the individual county title at 1600m and once again leading his squad to a team title—Manhasset’s second consecutive County AA Championship. However, he was far from finished. He would come back the very next weekend to run a personal best in the 3K Steeplechase (9:36), claiming another school record to qualify for the state meet.

While Court’s path to earning All-American honors was certainly not without its ups and downs, he continued to provide steady and sound leadership, even during his times of struggle. His generous spirit and can-do attitude helped instill confidence within his teammates, which translated to consistent improvement in their performances on the track. Tim’s passion for the sport and love for his teammates has arguably been his greatest contribution to the program and will certainly be his enduring legacy. He leaves behind a strong foundation that the program will seek to build upon as he pursues the next step in his running career at SUNY Binghamton this fall. Though no longer an Indian, the entire Manhasset running community will certainly be pulling for Courts as he continues to reach for new heights as a Bearcat.