Each year about this time, the Cow Bay Cruising Association, aka Thirsty Thursday, holds it annual meeting. 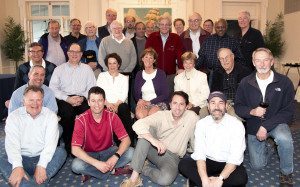 This is to plan for the upcoming season and award those teams from the year before who had podium finished. On Thursday, April 21, the group got together at Manhasset Bay Yacht Club for some refreshments. At their annual meeting, Anthony Viola, Manhasset Bay Yacht Club member, chaired the evening. After discussion about important issues for these “big boat” racers, it was time for the season awards.
According to Anthony Viola, these are the top boats for the 2015 season: In Division I Spring Series: 1. Bob Schwartz, Nordlys, Manhasset Bay Yacht Club, 2. Al Albrecht, Avalanche, Port Washington Yacht Club and 3. Arthur H. Buhr III, Leverage, Port Washington Yacht Club. Division II, Spring Series: 1. Chuck McCarthy, Speed D8, Port Washington Yacht Club, 2. Marc Epstein, Vision, North Shore Yacht Club and 3. Charlie Cannam, EnGarde, North Shore Yacht Club. Division III, Spring Series: 1. Robert Ebenau, En Passant, North Shore Yacht Club, 2. Richard Raskin, Osprey, North Shore Yacht Club and 3. Bruce Joseph, On the Beam, Manhasset Bay Yacht Club.
The top boats in the Summer Series: Division I: 1. Leverage, 2. Nordlys and 3. Avalanche. Division II: 1. Speed D8, 2. Vision and 3. Eric Weintraub/David Deutsch, Scarlet. Division III: 1. EnPassant, 2. On the Beam and 3. Her C Gem. There was no Fall Series.
The Thirsty Thursday group has been around for a very long time and it is a great bunch of racers who like their competition out on the water but then come back to land and enjoy each other’s company for drinks and dinner at their respective clubs. If you have just moved to the area and would like to explore either skippering your own boat or help out as crew, or if you just want to get back into sailing after a hiatus, please contact Anthony Viola at ajviola@mintz.com.
There is a really interesting story posted on The Guardian. It’s all about a message in a bottle that was sent 108 years ago, with the promise that whoever found it, would receive a shilling. The communication thrown into the sea by a Plymouth biologist in 1906 was found by a German woman and is confirmed to be the oldest in the world.
When the distinguished marine biologist threw his message in a bottle into the sea, asking whoever found it to contact him, he wasn’t expecting a speedy response. Which is just as well, because it took just over 108 years—now officially confirmed by Guinness World Records as the oldest such message in the world. The German woman who found it has been given the reward promised in 1908 by the scientific institution which has inherited the debt of honor: a shilling.
The bottle was among more than 1,000 thrown into the North Sea in batches by George Parker Bidder, as part of his research into the patterns of currents. This one was part of a batch from Nov. 30, 1906, and was found 108 years, four months and 18 days later in 2015 by a retired German postal worker, Marianne Winkler, on holiday on Amrun, one of Germany’s North Frisian islands.
Inside she could see a message reading “break the bottle,” but she and her husband, Horst, tried and failed to get the message out without destroying its container. Eventually, they extracted a postcard with a message in English, German and Dutch, asking for it to be returned to the Marine Biological Association in Plymouth, Devon. The Winklers could see it was old, but had no idea how old, as the card was undated. They duly followed the instructions to fill in the date and where it was found, then put the card in an envelope to preserve it and posted it off, copying the printed address to GP Bidder.
The association, founded in 1884, still exists and is an internationally renowned marine research institution. Although there was astonishment when the post arrived, Bidder’s name was still familiar in Plymouth, as in a remarkably long working life he had served as president of the association between 1939-45. He died in 1954, at 91. His messages in bottles helped him prove for the first time that the deep sea current in the North Sea flowed from east to west.
The card promised what had been in 1908 the reasonably handsome reward of a shilling—most were gratefully claimed within the year by fishermen. Guy Baker, the communications officer at the association, said they were determined Winkler would get the proper reward. “We found an old shilling, I think we got it on eBay. We sent it to her with a letter saying thank you.” Winkler also now has the honor of confirmation by Guinness World Records of her find: her bottle comfortably beat the last record holder, a bottle found in Shetland in 2013 that had been adrift for 99 years and 43 days. (Source: www.theguardian.com)