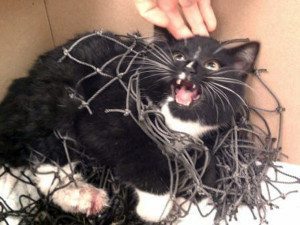 I received an emergency call recently during dinner with my family. Mr. A. of Flower Hill explained that he came home from being away for five days and found a cat stuck in his children’s soccer net. He said that the cat looked injured and the netting was tangled around his right rear leg. The cat had dragged the soccer goal from one end of his backyard to the other. When he approached to try to free him, the cat would lunge at him so he couldn’t get the cat out of the net. He couldn’t even get close enough to cut the net around the cat’s leg away. He posted a photo of the cat on the Manhasset Neighborhood website to see if he could find the owner. And then he called me.

I drove down to my office to get an anesthetic, an antibiotic injection, subcutaneous fluids and scissors (for the net). I arrived at Mr. A’s and found the male cat tangled in the netting of a completely collapsed soccer goal. Watching the cat at first from a distance, we observed that it was a stray cat that had been neutered. I could tell because the tip of his left ear was clipped. This is the standard procedure when strays are neutered. It prevents people from trapping them again thinking that they need to be neutered.

I planned to give an intra-muscular injection of an anesthetic. However, as I got closer, I realized that was easier said than done. With some quick moves, I was able to give the anesthesia without being bitten. I had to give the injection subcutaneously instead of in a muscle because it is easier and, thus, quicker. This just meant that the anesthesia would take longer to sedate the cat. Instead of three to five minutes, it could take up to 15 to 20 minutes. When our stray finally got sleepy, I was able to free him from the net.

I stretched him out alongside the soccer net and examined him. His toes and leg bones did not appear to be broken. His leg was a little swollen and also had some lacerations from his struggle to free himself from the netting. And, he was dehydrated. I gave him fluids subcutaneously (or under the skin) for the dehydration and gave him an antibiotic and an anti-inflammatory. Then I took him back to the hospital so that he would wake up and the technician who lives upstairs could check on him. He recovered without any problems, and we then gave him vaccines. I took him back to Mr. A’s house three days later after the swelling in his leg had gone down and released him. I opened the carrier and he bolted into the bushes. No long goodbyes. But, after a few moments, he came out of the bushes and stared at me for a few seconds and then ran away again. I am not sure if he was saying thanks, goodbye or just wanted to know what we were going to do next.

Dr. Hendrickson is the veterinarian and owner of Manhasset Animal Hospital at Plandome Rd., 516-627-0057. 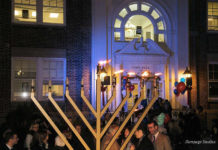 Is Hanukkah the Jewish Christmas? 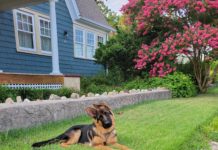 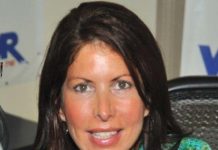