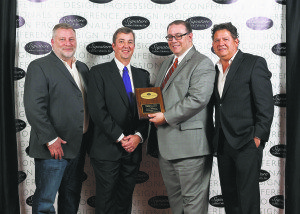 When Joseph Noto and his son, Anthony, partnered to open a home improvement supply business located on McDonald Avenue in Brooklyn in 1929, they hadn’t a clue that it would eventually lead to a successful, 85-year-old business and staple in local communities across Long Island.
John Starck Sr. married Frances Noto in 1970, and shortly thereafter, joined the family business. Four generations later, Showcase Kitchens is owned and operated by the Starck family, with John Sr. as vice president, and sons, John Jr., as president, and Anthony, as director of operations.
“I grew up in Queens and started in the business when I was 14, which was about 30 years ago,” said John Starck, Jr., who has been a designer since he was 14 and manages the business and overall brand as a whole. “It’s an old family business and we’re continuing that legacy now.”
Among the Showcase Kitchens team are principal designers Michael Rosenberg and Luis Viteri. Rosenberg, who grew up in Merrick, has been in the business since 1985 and joined forces with the Starcks in 2012. Viteri began working with the Starck family out of college, and has known Starck Jr. since they were 14 years old.
“We have a combined 90 years of experience,” said Viteri of the three.
“When I joined in the late ‘80s, it was originally a lumber and mason yard and evolved into cabinet manufactory and kitchen design, which we do today,” said Starck Jr. “As the Home Depots and specialty niche lumber yards became bigger, it kind of squeezed all of the little guys, so we had to become more specialized.”
The business strictly evolved into kitchen cabinetry, supplies and manufacturing when the team took it to another level. Showcase Kitchens moved to its Manhasset location in 2000, before branching out to the South Shore in 2004.
“We were based in Island Park until it was destroyed by Hurricane Sandy, and we rebuilt in Massapequa and have been thriving there ever since,” said Starck Jr. “We saw a surge in business after Hurricane Sandy, but it came in waves as most homeowners were still waiting to get their funding.”
As for being a part of such a long-term family business, Rosenberg and Viteri are humbled.
“We love having the support and experience of working in such an old family business, especially being one of the original people,” said Rosenberg. “We’re in the process of opening another showroom in Southampton. We have north and south and now we’ll have the east. We have a location in the city, but it’s more for consultation.”
“We have the experience to be able to do great design and having a family business is a great thing also,” said Viteri. “Collaboratively, our staff is close to 20 and we have eight or nine manufacturers.”
Of those manufacturers come products from Italy, Canada, Pennsylvania and all over. Massapequa’s showroom is fairly new and changes displays based on trends. The business designs for both small and large spaces but is not limited to kitchens, extending to bathroom, office and living room design. Popular trends include traditional and classic to French country and modern contemporary.
“A kitchen renovation can take anywhere from two to three weeks up to four months,” said Rosenberg. “It depends on the product they pick, but custom costs more because it takes longer.”
All of the owners share the responsibility of making sure that orders are correct and meet with clients to make sure they understand what they’re getting.
“We get their wish list and go from there but also offer our suggestions as well,” said Starck Jr. “We’re on a corner so the location is prime and brings in a lot of business.”
Showcase Kitchens is proud to give back to the community. Several months ago, they participated in NBC’s George to the Rescue, where host George Oliphant and his team of contractors and designers rescued the home of an Amityville couple.
“Over my tenure, we’ve given to many charities that we donate either money or time to,” said Starck Jr., who also helped to form the Designers and Builders Alliance, where designers, builders, contractors and architects get together to give back. “We recently gave back to Tuesday’s Children and that charity is instrumental all over the world.”
Most of Starck Jr.’s business is from word of mouth and referrals, as customers are the best advertisers.
“Creating a relationship with the homeowner, their contractors, architects, designers, is key,” he said. “We work very hard and it’s gratifying to see the acknowledgment of peers, organizations and magazines. Aside from hearing clients sing our praise, that’s probably the next best thing to acknowledge the hard work we do every day,” said Starck Jr. of the 40 plus awards the business has garnered.
The company designs to a majority of people and turns out a product that is easy to resell. And you better believe they are proud of their reputation.
“We do what’s right and give a lot back,” said Starck Jr. “We bring skills and capability but also honor and integrity. Making the client’s experience a positive one is our priority.”
Showcase Kitchens is at 1200 Northern Blvd. in Manhasset and at 5340 Merrick Rd., Massapequa.
Visit them on the web at www.showcasekitchensny.com.