Ronald Hausch has been fishing since he was 8 years old and the itch to catch the big fish has never left him. His first boat was given to him by his father, a small 8 foot nothing boat, but now at 75, he has access to 105 different boats as a member of the Freedom Boat Club. He is still living his childhood dream of going out to sea and doing what he loves.

“What I love most about the fishing is getting out on the water,” Hausch said with a big smile. “It’s so peaceful and relaxing to go out. Especially if I’m out on Montauk Point, gone going off out there, it’s a beautiful scene, the Montauk lighthouse and all the scenery around. And if I go out down here in Port Washington, you go past Sands Point, with all the big mansions down there and the beautiful scenery. I mean it’s very, very relaxing. But then there’s the adventure and excitement of catching some of these real big fish.”

At a mere 20 years old, he caught a 450-pound dusky shark—it’s still the biggest fish he has ever caught. When he was 45, he was able to reel in the prized bluefin tuna, weighing in at 325 pounds.

A Manhasset resident of 33 years, Hausch grew up on Morgan’s Island, also known as East Island in Glen Cove. He graduated from Penn State with a degree in business administration, his junior year was Joe Paterno’s first year as head coach of the football team. He ended up becoming an insurance broker and a pretty successful one, at that.

Hausch started out as an assistant account executive at Walter Kaye Associates, which no longer exists after being swallowed up by another firm, and worked his way up to first vice president. After 27 years at the firm, he decided to call it quits and retire at the age of 53.

“It was a highly stressful job,” Hausch said. “That’s why I decided to retire at 53. I pulled out some of my savings and money and put them into investments and I started doing online securities trading on my own. That’s what I’ve been doing ever since then.”

Everything was going well for Hausch, his weekday pass for the Freedom Boat Club allows him to go out and fish on some of the newest boats available. He was traveling the world with his wife, Helen, who recently retired from teaching special education at the Manhasset Secondary School.

“Her whole life, she’s never gone fishing with me,” Hausch said. “She doesn’t like it. Not everybody likes fish, she prefers to go vacationing.”

On Nov. 6, 2018, Hausch was out on an angler in Port Washington trying to catch some black fish, despite not going out often in the fall. On his drive home from his fishing expedition, he noticed that something peculiar happening with his vision.

“I was driving home and it looked like it was having head on collisions,” Hausch said. “So I went to my ophthalmologist.”

Hausch had suffered a stroke.

Hausch was lucky, he had friends that became paralyzed after a stroke. His recovery period was three months. 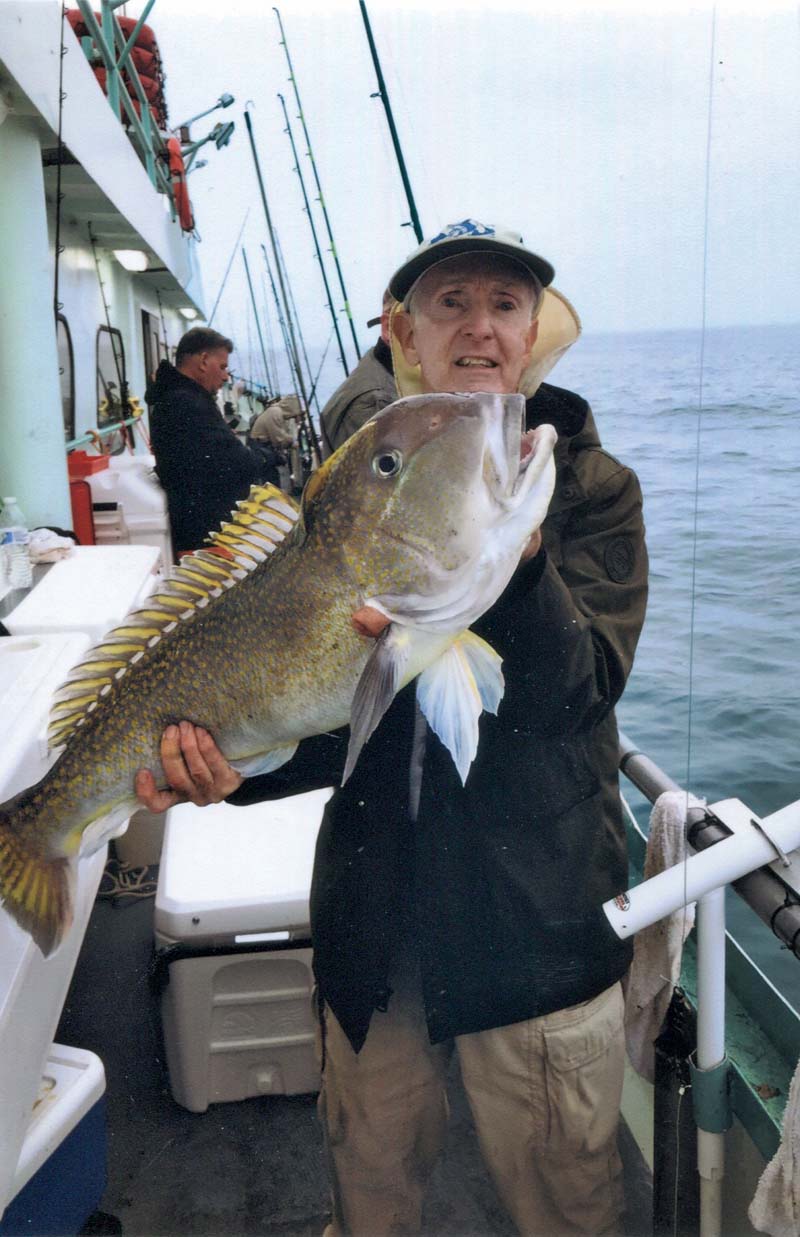 By mid-May, he was back at the Freedom Boat Club going out on the water. But he needed a new challenge. A recommendation from one of his fishing buddies led him to sign up for the Viking Abyss Fishing Trip, a four-day, three-night adventure that would take him 165 miles offshore in water more than 1,000 feet in depth. It was time to catch some big fish.

Hausch was not going to let the opportunity slip by. He caught a fluke weighing 9.25 pounds and a 33-pound tile fish. Both won their respective pools on the boat, Hausch won $920.

“It was a fishing adventure trip for me and it was like a thrill of a lifetime, I tell you,” Hausch said with exuberance. “It was so exciting.”

On the same high-low rig he was using when he caught his tile fish, a 10-pound pollack was also caught. Most of the fishermen on board were using electrical reels because the lines would go out hundreds of feet, but not Hausch. He reeled in 900 feet of line with 43 pounds of fish tugging the other way, manually.

Hausch is not slowing down either, he talks about fishing as if he was still that 8-year-old boy.

When asked how long he plans to continue fishing, he answered the way only Hausch could.

“Until I drop dead.”