By Christina Claus and Marco Schaden

Applications have been filed by ExteNet Systems in Flower Hill and Plandome, requesting approval for 28 total cell nodes between the two villages. ExteNet provided a drive test to both villages; however, it only included data from the main roads and not directly within the vicinity of the proposed node locations in the villages.

In order to test the signal of each individual proposed node, we drove through each village, stopping as close as possible to each originally proposed location. The tests were done on June 21, July 10 and 19, between 10 a.m. and noon on each of those days. The original locations were tested once and the final number found on the table was the settled dBm.

For the test, we used our personal cell phones to conduct a field test for Verizon, T-Mobile and AT&T. While Verizon is the cellular company that hired ExteNet to implement the nodes, there is a strong likelihood that other wireless companies will add their network to the nodes if the application is accepted. We used a Galaxy S8 for Verizon, an iPhone 10 for T-Mobile and an iPhone 8+ for AT&T.

For Android phones, the field test mode can be found under the settings menu. Tap settings, tap about phone, tap status or network, tap SIM status and the dBm is under signal strength. 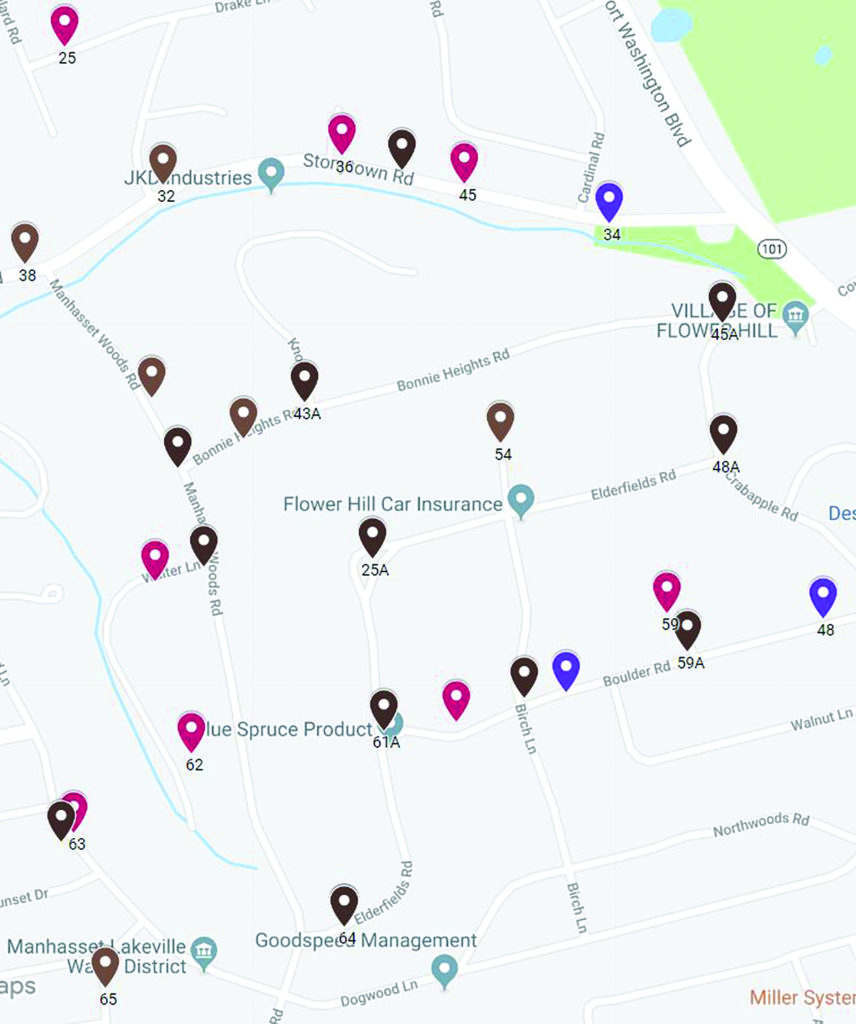 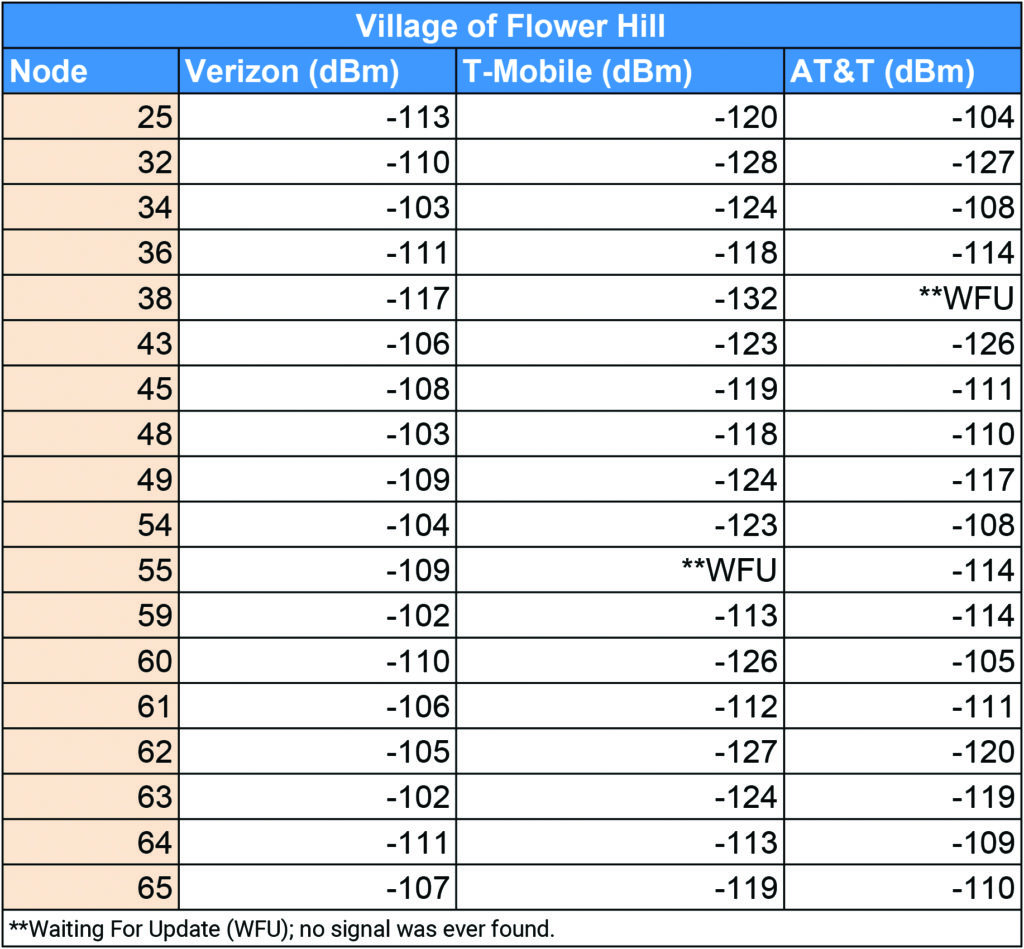 While Verizon did test the best out of the three networks, there was not one node location that tested average or higher. Out of the 28 originally proposed node locations, 22 were in the poor range and six were very poor or in a dead zone, according to the Wilson Amplifiers dBm signal ranges found on their website. 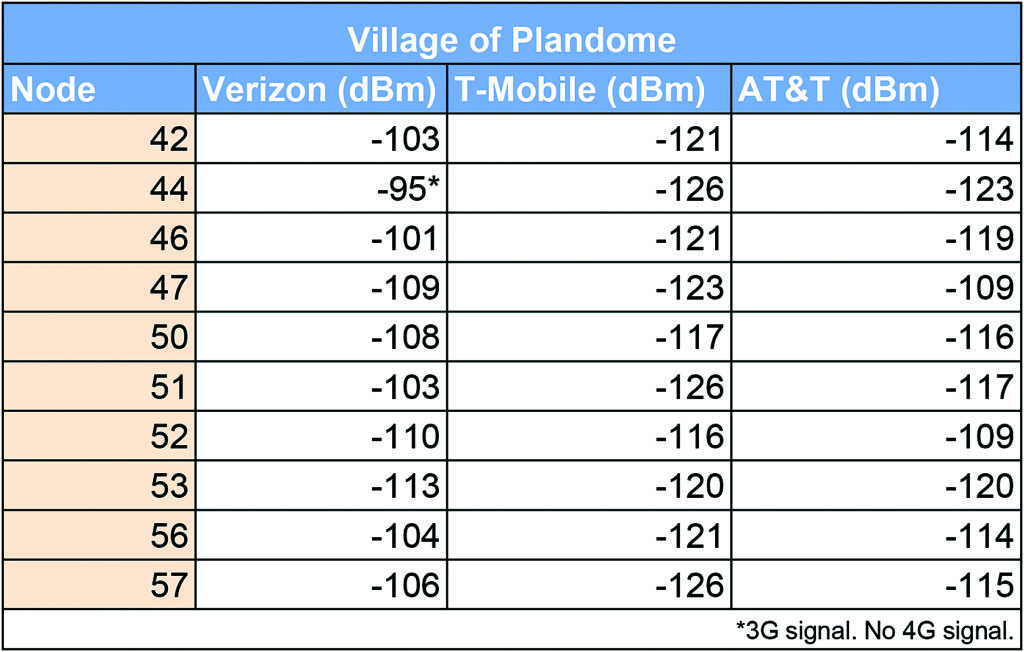 T-Mobile tested by far the worst out of the three networks. Each of the 28 originally proposed node locations tested as very poor or dead zone.

The data we collected has value, but there are many limitations. There are better and more accurate ways to collect dBm signal readings with technology and equipment that we did not have access to. Testing the originally proposed node locations at different times of day will lead to varied results because of the capacity capabilities. The weather can also play a factor in what kind of dBm signal reading you will get.

However, the data does show that neither village has an average, good or great overall 4G service provided by Verizon, AT&T or T-Mobile.

In the Village of Flower Hill, ExteNet submitted an application for 18 cell nodes throughout the village to proliferate Verizon 4G service. In May of 2017, ExteNet submitted an application to install wireless antennas and radios on replacement wood utility poles and install fiber connection to other nodes in the area to complete the Distributed Antenna System (DAS) in the public right-of-way. The application was found deficient and incomplete. In December of 2018, the company re-filed the application for a total of 18 nodes. The application for a special use permit is currently under consideration. Since then, the village has continued the public hearing on the application. On Feb. 6, ExteNet submitted a letter to the village that indicated three nodes would involve replacement poles and 15 involve the attachment of small cell equipment to PSEG poles. On April 5, the applicant proposed two nodes for existing wood utility poles, five replacement wood poles, eight decorative metal street lights, two existing utility poles or street lights and one decorative street light or flag pole. The May 6 public meeting presentation yielded nine proposed relocations of the proposed nodes. The public hearing has continued at each board meeting since.

Throughout the process, the Flower Hill Board of Trustees heard opposition from the community, who claimed they had great service from their carriers, including Verizon. They were concerned about health effects of the nodes being in such close proximity to their homes and voiced worry over the nodes’ impact on property values.

In order to help inform the board’s decision, the village hired CityScape Consultants, Inc., a company that specializes in serving government entities and the public sector for all issues related to wireless communications. At the July 1 meeting, CityScape presented an overview of the application—what it included and what it was missing. CityScape found that the applicant ExteNet has not yet provided a demonstration or reasons why the highest locational priorities specified in the village’s code section 209-77A(1-6) are not possible, a description of the anticipated maintenance needs—including frequency of service—personnel needs, equipment needs, the potential traffic safety and noise impact of such maintenance and materials to help address aesthetic and neighborhood impact mitigation.
The next board meeting for the Village of Flower Hill will be on Aug. 5 and the board of trustees will have to make a decision on whether to deny, approve or extend ExteNet’s application by Aug. 15.

The Village of Plandome also hired CityScape Consultants Inc. to help in evaluating the application brought by ExteNet. The application process of the 10 cell nodes seems to be moving along after ExteNet and the village agreed on an extension of the deadline to Sept. 9, the same day the village will have its monthly board meeting.

The village has accepted the locations of nodes 44, 47, 51 and 52. The village has also denied several node 42 alternatives, including nodes 42A, 42B, 42C and 42E, but the 42D still remains an option. Node 53 has two alternatives, 53A and 53B, that are along the perimeter of the Woodedge Road cul-de-sac. Node 46 could move west alongside North Drive depending on where Node 42 is placed. Node 57 has the potential to move from Rockwood Road East to the corner of Rockwood Road and Plymouth Road.

Node 42 and its alternatives are designated to be ornamental light poles, as is node 46. Nodes 44, 53, 53A and 53B would be implemented with a new wood pole. Nodes 47, 52, 56 and 57 would be placed on a replacement wood pole and nodes 42 and 50 would go on an existing wood pole. Node 51 would be set upon the existing metal lattice tower.

The board has also had preliminary discussions with Elite Towers about building a macro tower in the village. This would eliminate the need for the 10 cell nodes. However, the board is not certain that Elite Towers is being backed by a wireless company f
or the tower.

Similar to Flower Hill, residents have come out in droves to the board meetings and public hearings to express their opposition to the cell nodes. Their concerns are also the health effects of the radiation emissions, loss in property value due to aesthetics of the nodes and the satisfaction of wireless service by their provider.

The main concern of residents are the health hazards that these cell nodes may pose, especially to children in the area. Federal regulations require the nodes to be below a threshold of radio frequency emissions. ExteNet says their nodes will not reach 1 percent of the regulated amount dictated by the federal government. When other carriers come in to use ExteNet’s nodes, the radio frequency emissions will increase, but will still hover around that 1 percent marker, according to ExteNet Senior RF Engineer Chris Fridrich.
If either one of these villages were to deny the ExteNet application citing health concerns, they would be sued in federal court and destined to lose.

“I don’t usually discuss it because unless you can show that a facility is not FCC compliant, boards are not allowed to consider the adverse health impacts,” said Andrew Campanelli, an attorney who represents residents of Flower Hill and Plandome opposing the cell nodes. “Adverse health impacts are a very serious concern even though we are not allowed to talk about it.”

Campanelli used to work for a company that built cell towers. Now he battles against them and cell nodes. He switched sides after finding the case of a 4-year-old girl from Bayville who lived close to a cell tower that was built on a water tower near a school. She was diagnosed with leukemia after moving to California. Doctors said the cancer was in full remission—90 percent chance this kind of leukemia would not come back. The family moved back to Bayville, she went to that school and within six months, the leukemia came back and she passed away, according to Campanelli.

“That bothered me after I helped put up so many towers,” Campanelli said. “I said, ‘you know what, I got to figure this out for myself.’ I spent a year researching everything I could find. There were some medical studies that were easy to read, other ones that I had to sit there with a medical dictionary to figure out what I was looking at. After a full year, I was constrained to come to the conclusions for myself. You live within 1,500 feet of a [cell] tower, your odds of getting cancer or leukemia go up 300 percent. Number two, the segment of the population most susceptible is children. Those are my personal beliefs based upon all of the expert reports I have read. Again, you won’t hear me say this in front of any board because I’m not allowed to.”

Edward Currie, an associate professor of engineering at Hofstra University, is skeptical. He wants hard evidence and doesn’t see it coming from either side.

“When I was growing up, which was back in the ‘50s, doctors were on TV saying that smoking was safe and part of the problem was the long-term effects of smoking were not known,” said Currie, who specializes in electrical engineering. “Same thing is true for radiation. We don’t know what long-term exposure to low-levels of radiation represent as a potentially hazardous situation for humans. So, all we have is speculation. People make all kinds of claims, but the reality is—you don’t know.”

Campanelli argues that he sees the evidence all the time doing the work he does and that is all the evidence he needs.

“Not two months goes by that I don’t get a call from some kid who is 26 years old, who worked on towers for two years, and now, he is terminal with lymph node cancer,” said Campanelli. “Not three months go by that I don’t hear from three housewives, who live in a cul-de-sac, where they put a cell tower and within 11 months of the cell tower, all three were diagnosed with breast cancer. No one, no one is going to tell me that there are no adverse impacts from [radio frequency] radiation.”

However, Fridrich does not believe in any of this. He hears the concerns, but this is the world we live in now—at least for Fridrich.

“Everyone is worried about safety,” Fridrich told the Manhasset Press in May. “They are worried that they are going to get cancer. Fact is, we have been exposed to radio frequency for decades, like radio, TV, cellphones and Wi-Fi.”

The professor wants to see the science behind both of these claims. Right now, we do not have it.

“Just be careful when people tell you stuff because a lot of it is arbitrary,” said Currie. “You will get opinions, but something supportive with evidence will be hard to find. I don’t think anyone knows.”