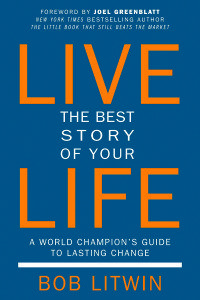 Longtime Long Island tennis legend and performance coach Bob Litwin is returning to his hometown next week to talk about and sign his new book Live the Best Story of Your Life: A World Champion’s Guide to Lasting Change. The book recently hit the stores and was the number one new release on Amazon in the business coaching and mentoring category.
A former #1 World Senior tennis player, 18-time national champion and hall of famer, Litwin is the real-life version of Wendy Rhoades, the hedge fund coach of Showtime’s hit new show Billions. He coaches athletes of all ages and levels as well as some of the most influential people on Wall Street. For anyone who wants to make a change in any part of their life, Litwin’s method of change will provide the simple steps. Litwin was a longtime resident of Manhasset.