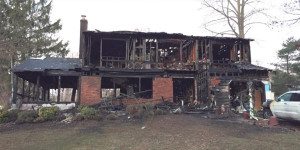 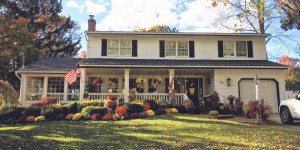 The four-alarm blaze gutted the home. It took volunteer firefighters almost two hours to bring it under control.

The house was totally engulfed in flames and is now a mere shell. According to reports, the fire began at approximately 2 a.m. According to a nearby neighbor, Dee Quinn, flames engulfed the front of the house. Both Cardillo and his wife, Debbie, were able to escape the fire by crawling out a second-story window in a daring exit from the house. The couple stayed at a nearby neighbor’s home while the firemen were getting the flames under control.

The cause of the blaze is still under investigation by the Suffolk County fire marshal.

The home, located in the Bretton Woods section of Hauppauge was built in the 1960s. All that is left of the structure are beams and an exterior wall of brick. Their two cars were also damaged in the fire. The neighbors wanted to start a Go Fund Me account, but Cardillo declined, saying there were others out there who really need the money.

The school board issued a statement on Friday stating, “This morning, Superintendent Charlie Cardillo lost his home to a fire. Thankfully, Charlie and his wife, Debbie, are safe. Our thoughts and prayers are with them at this time.”

Rosemary Johnson, assistant superintendent of the Manhasset school district spoke with the Manhasset Press on Saturday, Dec. 10, said, “The outpouring of concern from the community is tremendous.”

Stunned by what happened, the superintendent declined any assistance, claiming he was happy to be safe and that no one was hurt. According to Johnson, Cardillo was stunned by the fire and grateful, he and wife Debbie were safe. As far as any help, Johnson stated Cardillo declined any assistance claiming “there are others more needy that need help.”

However, former Manhasset High School students Spencer Tennenbaum, Tim Petras and Nick Magliulo, all currently attending Colgate University, didn’t hesitate to set up a “Go Fund Me” account at www.gofundme.com/help-fund-the-cardillo-family after hearing what happened. Tennenbaum, a triplet, Petras, a twin, and Magliulo all graduated in 2016. These kids who came from the Manhasset bubble were just a few of the students Cardillo had influenced in their lives. A family man, Cardillo took the time out to know each and every one of the nearly 4,000 students who attend the district schools, especially the seniors, and always showed interest, encouragement and approval in their activities. No matter what season, club or sport, Cardillo always attends a game or activity to cheer on the Manhasset Indians. He works extremely long days to keep on top of district issues, starting from 6 a.m. in the morning to late at night and on weekends. It is not surprising the loyalty he has cultivated from the students who have graduated from Manhasset High School.

“Mr. Cardillo is well-known throughout Manhasset as one of the most outgoing and kindest individuals that has been deep in the fabric of and dedicated service to our schools and community. From seeing Mr. Cardillo being ever-present at the drop of a hat, to lending a helping hand to worthy efforts, to his sporting orange and blue while cheering in the crowd at many sporting events, it’s clear that his involvement in our community exceeds the standards of many others,” said Richard Bentley, president of Manhasset Greater Council of Civic Associations. “After devoting much of his career to ensure that every Manhasset student is entitled to the best education our system can provide, it is clear that Cardillo has left a huge, superior mark on the entire Manhasset community.”

The Manhasset School Community Association sent out their weekly email blast to parents indicating a way to support the family. The blast said, “The SCA understands that many in the Manhasset community want to reach out to Charlie and his family and help them through this extraordinary time. In an effort to coordinate the community’s interest, the SCA will collect your messages of concern, support and well wishes for Charlie and Debbie and deliver them in bulk. Elementary school families can send their messages marked Attention: Cardillo Family to their room reps. Secondary school families can drop off at 642 Park Ave or 180 Remington Rd. Messages will be delivered Dec. 16 and Dec.22. We hope these sentiments will buoy the Cardillos now and in the months to come.”

According to Johnson, the Cardillos are thankful they are alive but worried how they will host the annual Cardillo family Christmas party for 40 people.

The Manhasset School District is in the midst of searching for a new superintendent, as Cardillo has decided to retire come June 2017. The board has hired Hazard, Young, Attea & Associates to assist in the search. Cardillo has worked on behalf of the Manhasset community for more than a decade.