Town of North Hempstead Supervisor Judi Bosworth gave her seventh state of the town address at the Clubhouse at the Harbor Links Golf Course in Port Washington on Friday, Jan. 31. More than 280 people attended the event, which was hosted by the League of Women Voters of Port Washington-Manhasset. The event began with the Pledge of Allegiance which was led by members of the Town of North Hempstead’s Veterans Advisory Committee. Ian Miller, a student from Schreiber High School sang the “Star Spangled Banner.”

Bosworth began by thanking the League of Women Voters and by remembering the 100-year anniversary of the ratification of the 19th amendment, which gave the women the right to vote. She then began by addressing members of the crowd and thanking them for their attendance. Many government officials, special district commissioners, school board members, union leaders and local community members attended the ceremony.

According to Bosworth, the town continued to keep the town’s infrastructure updated and safe by designating more than $111 million towards capital projects in the next five years. The town enhanced programming and amenities in their parks and at the Yes We Can Community Center in Westbury, as well as offering the community extended business hours at the building department and tax receiver’s office. The town has also reduced their debt by $27.6 million since 2014.

“As the national debt goes higher, North Hempstead’s goes lower,” Bosworth said. “The town’s fiscal stress score is 1.7, which is one of the lowest of any town on Long Island, according to data released by the Office of the New York State Comptroller. Comparatively, there are towns on Long Island with fiscal stress scores as high as 70 and above, further demonstrating North Hempstead’s commitment to sound financial management.”

Bosworth highlighted several accomplishments from the past year including the construction of two miles of bike and hiking trails, the new dog park at Michael J. Tully Park, the new structure for the Northern Bobwhite Quail at the Clark Botanic Garden and more.

Last year, the town also received a Civil Rights grant from the National Parks Service, which was used to capture civil rights stories from people in the community who lived during that time period. The film highlighted some of the town’s local civil rights heroes, including Councilmember Lee Seeman.

“I like to think that continuing to show this film will help to highlight and expose the issue of housing discrimination and help move us forward towards a more just society,” Bosworth said.

Bosworth also spoke about the latest rash of violent hate crimes that have taken place in New York and the United States recently.

“We need to stand together in unity, so that every resident knows they live in a town that will speak out against acts of anti-Semitism, Islamophobia and other acts of hate and prejudice,” she said.

Bosworth stated that the town is in the process of planning a meeting to further this initiative sometime in the spring.

Bosworth highlighted other accomplishments including the stabilization of the Beacon Hill Bluffs in Port Washington, the creation of a green procurement policy for the town, dredging projects at Town Dock, Manorhaven Beach and Gerry Pond Park, a study to find space for a proposed cat shelter and more.

According to Bosworth, the town has attempted to work with the Federal Aviation Administration (FAA) regarding the incessant airplane noise and emissions plaguing members of the community. The town has consulted with village mayors, including East Hills Mayor Michael Koblenz regarding the resident’s growing complaints and concerns. Bosworth stated that the town is now pursuing the retention of a law firm to take legal action against the FAA.

“Aircraft noise has become a critical quality of life issue for many of our North Hempstead residents and we all deserve better,” Bosworth said.

In 2019, town officials and residents were concerned about the Army Corps of Engineers developing plans to place flood gates near the Throgs Neck Bridge to protect Manhattan from storm surges. Bosworth is planning to meat with a representative from the Army Corps on Feb. 26 to request a study of the possible impacts their proposed options may have on the town.

In 2020, the town is looking forward to the redevelopment of North Hempstead Beach Park, the re-visioning of Whitney Pond Park in Manhasset, the ribbon cutting on the new extension of the Hempstead Harbor Trail, the total renovation of Laurel Homes in Roslyn, the launch of the Senior Softball team and more.

“This next year is going to be a year of exciting initiatives and forward movement for our town,” Bosworth concluded. “We have a great team working to make these plans a reality. You have placed your trust and confidence in me as your supervisor and I do not take that lightly. It is truly an honor to serve you. Just imagine what we can do by working together.” 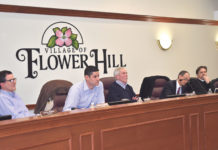 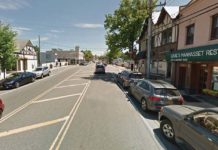