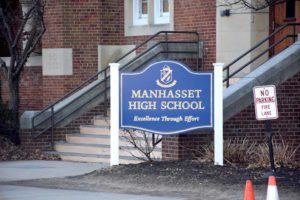 Manhasset High School joined the upper echelon of state schools recently when it was identified as one of 16 Reward Schools in Nassau County by the State Education Department. The honor, which recognizes schools with a high academic achievement or those with the most progress in the state, was announced by state education commissioner MaryEllen Elia.

The 16 Nassau schools are part of 155 statewide to claim the achievement. In order to nab Reward School recognition, schools must be in the top 20 percent of schools in the state for English Language Arts (ELA) and math performance for both the 2015-16 and 2016-17 school years; have made Adequate Yearly Progress for those two school years for all groups of students on an array of measures, including the requirement that 95 percent of all groups participate in the ELA and math assessments; and not have unacceptably large gaps in performance between students who are considered low-income students.

Superintendent of Schools Dr. Vincent Butera for Manhasset Union Free School District said that this honor was made possible by the hard work of students, teachers and the entire school at large.

“On behalf of the entire district, I would like to commend Manhasset Secondary School on its designation as a New York State Reward School,” said Butera. “This recognition is a testament to the hard work of the school’s administration, teachers, students and the greater Manhasset community. While this is an honor, it is just one benchmark of our school’s success. Looking ahead, we look forward to continuing to offer those programs that allow our students to grow and succeed in a myriad of ways.”

In addition, elementary and middle schools must demonstrate that more than 50 percent of students are making annual growth in ELA and math; and that more than 50 percent of the school’s lowest achieving students are also making gains. High schools must have graduation rates above 80 percent to be a high-achieving school and more than 60 percent to be a high-progress school and the percentage of students in the school who graduate with a Regents diploma with advanced designation or a Career and Technical Endorsement must exceed the state average. Additionally, high schools must demonstrate that their graduation rate for students who entered the school performing below proficient in ELA or math exceeds the state average.

“The teachers and administrators at these Reward Schools work hard each day to raise the bar and give their students opportunities to achieve their dreams,” said Board of Regents Chancellor Betty A. Rosa. “The proof is in the results these schools have obtained and I am thrilled to celebrate their success.”

“It’s truly impressive that so many of this year’s Reward Schools were able to maintain the designation for three years in a row,” said Elia. “All of these schools serve as models to others in the state to inspire them to achieve a high level of accomplishment and improvement.”