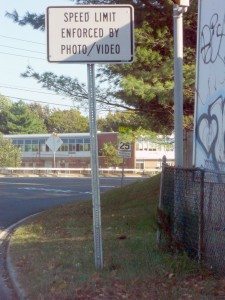 nanimously to repeal the School Zone Speed Camera Program.
The cameras, which were introduced this past August, issue an automatic $80 traffic ticket (plus additional fees) to any vehicle exceeding the posted limit within a 10 mph buffer, during school hours. According to officials, more than 400,000 tickets were issued since September, garnering $32 million in revenue for the county. Of the tickets issued, 60 percent were for speeds 1 to 5 mph over the violation threshold, while 27 percent were issued from 7 to 9 a.m. and 2 to 4 p.m., when students were most likely to be walking to or from school—both points leading residents to believe the cameras were strictly for the cash.
However, John Marks, executive director of the Nassau County Traffic & Parking Violations Agency, said
the program’s intention was always safety first.
“I think personally that it was a good program,” he said. “Speeding in school zones is at epidemic proportions. This program, like it or not, helped people slow down. I hope now that [the program] is no more, people don’t start to think the mechanical police officer isn’t watching so they can go back to old habits. There was a need for these cameras. It would be great if people complied with the law and there was no need for speed cameras. But that’s not the case.”
Marks, who served six years as a Nassau County District Court judge and seven years as a Nassau County Family Court judge, said that with the cameras, the county was merely enforcing laws that were already
in place.
“The cameras were there to enhance the safety of children and other pedestrians,” he said.
But according to Robert Sinclair Jr., manager of media relations for AAA New York, the vote to remove the cameras is a “tacit admission that the program was a money-grab from the start.”
“Few things are more important than school zone safety, and those who drive recklessly deserve a penalty, but Nassau penalized safe drivers to fill budget gaps,” he said. “When there is no apparent connection between enforcement and traffic safety, the public loses trust in its government.”