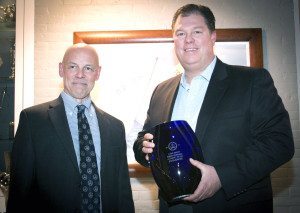 The Yacht Racing Association of Long Island Sound (YRALIS) held its annual meeting and awards ceremony at Larchmont YC on Sunday, Dec. 6. This meeting is truly the end of the racing season and the beginning of the holidays. It was a festive group that gathered at Larchmont Yacht Club for the 120th annual event. Over 100 people enjoyed presenting remarks by YRA President Charles Powers, who spent some time giving the audience a short history of the YRA, which began back in 1895. Next up was an informative presentation about Rocking The Boat, a Bronx-based nonprofit whose purpose in life is to empower young people from the South Bronx to develop the self-confidence to set ambitious goals and gain the skills necessary to achieve them. Founder and Executive Director Adam Green, accompanied by terrific photos, explained how students work together to build a wooden boat, learn to row and sail and restore local urban waterways, and revitalize their community while creating better lives for themselves. Over 200 teens per year are engaged in programs that last throughout their high school careers and into college. For more information,go to www.rockingtheboat.org.
Andree Pruett, Riverside YC, chair, YRA Nominating Committee, presented the Slate of Officers for 2016: President—Stephen Cain, Huguenot YC; Vice President—Cynthia Parthemos, Larchmont YC; Vice President—Arthur Buhr, Port Washington YC; Treasurer—Jeffrey Jammer, Lloyd Harbor YC; Secretary—Park Benjamin, Seawanhaka Corinthian YC; Director, Class of 2016—Iris Vogel, Huguenot YC; Director, Class of 2016—Charles Goodrich, Stamford YC; Director, Class of 2017—Dana O’Brien, Riverside YC; Director, Class of 2017—Josh Burack, Can One Evening Race Association; Director, Class of 2018—Rich Rubel, Centerport YC; and Director, Class of 2018—Michael Millard, Indian Harbor YC. 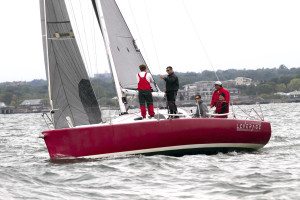 Local sailors winning YRALIS season trophies include: In the PHRF division (big boat racing), Craig Albrecht, Port Washington YC, won the trifecta for the Caper Trophy, coming in first in the Spring Series, 1st in the Fall Series and 1st Overall. Paul Strauch, Manhasset Bay YC, came in 2nd in the Gitana Spring Series. In one-design racing, winners include: Manhasset Bay One Design (MBOD): 1. John Silbersack, Dogged, and 2. Ralph Heinzerling, Claes Larsson, Peter Bergen and Clay Davenport, 2nd, Miss B Haven. Winners in the Sonar Class: 1. Sue Miller and John Browning, Ping, and 2. Claes Larsson, Cindy Jordan, Ted Toombs, Whimsey.
All are members of Manhasset Bay YC. Congratulations to all for the outstanding achievement on the water.
John Lennon was killed 35 years ago on Dec. 8, 1980, on the Upper West Side of Manhattan. Readers may be wondering what this has to do with a sailing column. In an interesting recent news release, Lennon was on a sailing trip in 1980 that took the former Beatle into the middle of the Atlantic on a 43-foot schooner with four strangers and a mysterious figure known only as “Captain Hank.” It seems that Lennon was fighting a five-year bout of writer’s block and thought the high seas might help.
All this is in a book, which was sold at a recent auction held in London by the auction house Cooper Owen. It is signed by several sailors and guests on the vessel Megan Jaye, and includes notes and doodles made by Lennon during the stormy 600-mile voyage from Rhode Island to Bermuda in June of 1980. One of the notes reads, “Dear Megan, There is no place like nowhere. And thanks Hank, Love, John.” Lennon drew a picture of himself with a beard, sailing the Megan through the Bermuda Triangle. The book contains entries and anecdotes that touch upon the importance of this Bermuda trip, which is credited with lifting the Beatle out of depression and inspiring him to begin writing his last album, Double Fantasy. Lennon, rock historians say, considered the Bermuda trip one of the most important events of his life. Source: John Clarke Jr. in Paste magazine, www.pastemagazine.com.
The International Sailing Federation is the governing body for sailing worldwide. This organization began in 1907 with the International Yacht Racing Union. In 1996, the organization changed the name to the current ISAF. That is until Dec. 8, when it was announced that the world governing body for the sport of sailing and yacht racing is now called World Sailing. Officially the name is rebranded to World Sailing—A Sport for Life.
At the heart of the federation moving forward is a significant focus on change for the better. More transparency, better communication, stronger governance and greater accountability are the four main aims of the new leadership team and the rebrand to World Sailing represents their commitment to those aims.
Not only will the federation have a refreshed look and focus, the new motto—“A Sport for Life”—also reinforces the team’s dedication to the whole world of sailing. Malcolm Page, chief marketing officer of World Sailing, said: “We are really looking forward to a new era of sailing governance and myself and the team are determined to make World Sailing the best that it can be. It feels natural to develop our brand as the organization evolves. The new identity satisfies all of the existing positive expectations of what our previous mark stood for, whilst moving the brand forward to acknowledge the maturity, functionality and diversity of sailing.
“We have great history and tradition and of this we are justifiably proud. However, in some areas, we were stuck in the past. Only by thinking and acting together, acting now, sharing one clear and powerful message, can we move beyond this, remain relevant and grow as a sport.”
The future of the World Sailing will see a united sport from juniors venturing onto the water for the first time to champions competing at the Olympic Games or in the Vendée Globe. Greater value will be provided to Member National Authorities, Class Associations and Continental Federations, alongside initiative developed to grow and broader participation in sailing.