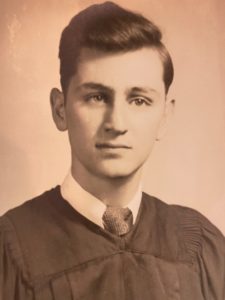 Robert Derderian of Manhasset passed away on January 13, 2022 at age 92. His life was defined by a deep passion for basketball and tennis, and an abiding love for and commitment to family, friends, and fellow veterans.

Bob was a resident of Manhasset for over 40 years and a proud member of the Manhasset VFW (Veterans of Foreign Wars) Post 5063. He was also a previous member of the Strathmore Vanderbilt Country Club and a booster of Manhasset High School sports teams.

Bob was one of four brothers (George, Charles, John) who grew up during the Great Depression in South Ozone Park, Queens, raised by survivors of the Armenian Genocide.

He played basketball against Bob Cousy and beat John McEnroe in a tennis match.

He graduated from John Adams HS, where he was a standout basketball player. He joined his brother John at New York University, where he became the leading scorer of their top-ranked basketball team, which played all its home games to sold-out crowds at the old Madison Square Garden.

After NYU, Bob enlisted and served overseas in the Coast Guard during the Korean War. Upon returning home, Bob resumed playing competitive basketball for many years for the New York Athletic Club, while at the same time going into business with his brothers Charles and John, first starting a flooring company and eventually a real estate business.

A rolodex of stories and a fountain of memories from a bygone era, Bob would regale you over a long lunch at a local diner with his precise recollections of:

It was a long and adventurous life for Bob. He did it his way. Graceful in movement, relaxed in manner, and curious of mind. Bob was a patient listener, always ready with an easy word of encouragement and a helping hand when you needed him.