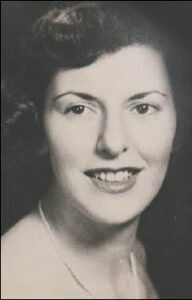 Grace Allen Pitti passed away peacefully on January 3, 2022 at age 89 at her home in Ponte Vedra Beach, Florida in the presence of family.

While working in New York City, she met and fell in love with her future husband Don. They were married in New Rochelle on August 14, 1954. Their 55-year marriage has always been considered the quintessence of devotion by their family and friends.

Grace was a beloved wife, mother, grandmother, aunt, and friend, and, along with her husband, a patron of the arts and philanthropist.

Her greatest love was her family: her husband Don, who was taken before his time, daughter Gail Coon (Jerry) of Ponte Vedra Beach, Florida, son Robert Pitti (Anne) of Fairfax, California, grandchildren Matthew, Julie, Mark, Scott, Samantha and Joseph, and nieces and nephews.

Grace actively supported her husband’s business career, while raising. their two children, and together with her husband was involved in all of the communities where they lived. She freely gave her time to others, and loved parties, being with friends, cooking, dancing, entertaining, traveling the world with her husband, loved the theatre and opera, and was an avid reader.

Her dancing included a stint with the Radio City Rockettes.

Grace and Don travelled to many places in the world, but their most favorite place was Lake Como, Italy. She was an avid fan of her children’s (and later her grandchildren’s) athletic endeavors. She was also a devoted fan of the New York Mets and the New York Glants football team.

Throughout her life, she was engaged with everything around her, always intrigued with what was going on with her family and with the world. Her unconditional love of family, kindness and generosity, and her authenticity and innate attribute of speaking the truth, will be remembered by all. As family and friends can attest, she was not one to mince words or to be trifled with.

We will miss her dearly, and she will always be in our hearts. A private memorial service will be held at a later date for family and friends. In lleu of flowers, people are Invited to make a donation to the AlphaOmega Miracle Home, St. Augustine, Florida for abused women, where her daughter Gail is a volunteer (www.aomh.org).

—Submitted by the family of Grace Allen Pitti