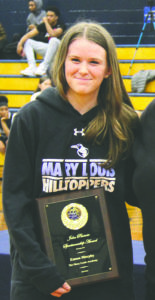 “Emma Murphy, was co-captain of The Mary Louis Academy (TMLA) junior varsity basketball team this past season,” head coach Antonio Menzies said. “She had a great season, averaging 22 points per game and scoring more than 30 three times. She came in the gym willing to put in hard work to get her ready for the season and continued to push through a couple of nagging injuries. As a freshman she took on a huge role as a co-captain and led her team and the league in scoring. Emma has a bright future and with all her hard work, the sky is the limit for her. Emma was voted by the coaches as the JV CHSAA John Piniero Sportsmanship Award recipient of the league. She also was named Player of the Game at The Bria Hartley Classic and The Hoopers Invitational.”

Assistant Athletic Director William Rabold said he knew Murphy was special when she walked in The Mary Louis Academy.

“She is well-mannered, kind and is always trying to put a smile on someone’s face,” Rabold said. “As the year had progressed, I was lucky to have the opportunity to speak with Emma more and got to know her a bit better in the hallways or after school. To see Emma’s success on the court this year was by no means a surprise. In speaking with some of her teachers, Emma is a hard worker and is determined to do well both in the classroom and in her performance on the court. During one game this season, Emma had told me that she had a dream she would score 40 tonight. I had told her to go out there and make that dream a reality. After the game, she walked over to me with a frown saying, ‘Mr. Rabold, guess what?’ I responded with ‘Did you not score your 40?’ and with that, Emma smiled and said, ‘No. I scored 43.’ She made this dream a reality. Emma is really a special young woman and truly deserved the John Piniero Sportsmanship Award after this season. I know that TMLA cannot wait to see what she has in store over her next three years.”

The TMLA basketball program is led by varsity head coach JoAnn Pinnock, who said Murphy brought a lot of energy and future to the program.

“This season was a memorable one thanks to my outstanding teammates and coaches who, in a short period of time, have become a second family to me.” Murphy said. “With that in mind, I would like to dedicate this award and season to the memory of two special members of the TMLA community who recently lost their lives due to the COVID-19 virus: Assistant Principal, Mr. Joe Lewinger and Varsity Basketball Assistant Coach, Dave Edwards. My thoughts and prayers go out to their families. They will be sorely missed.”