The Village of Plandome Board of Trustees unanimously adopted their 2016-17 budget of $3 million at a village board meeting last Monday evening, and recapped their village election this year. 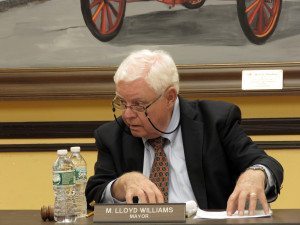 Village Mayor M. Lloyd Williams gave a brief presentation of the budget before its adoption, where he explained that anticipated revenues, excluding real property taxes, are at $432,826. Among the items included in this amount are permit fees, interest, justice fines as well as utilities taxes.
“The total appropriations of the budget, $3,047,036, is spent on day-to-day expenses and contracted services such as police protection, refuse collection, maintaining the fire department, insurance, road maintenance, payment of debt, salaries and benefits,” Williams said.
Plandome will remain under the 2 percent tax cap with an increase of 1.15 percent—the tax rate is 1.62 percent and the levy is $2.6 million, which represents an increase of $29,166. The original 2015-16 budget was $3.2 million.
Williams also mentioned that the budget reflects a transfer from fund balance of $51,551, and the budget year runs from June 1, 2016 to May 31, 2017.
In addition to adopting the budget, the village board unanimously voted to introduce a local law that will repeal their tax-cap override
law. A public hearing will be held next month.
Trustee Andrew Bartels explained that the village board adopted the tax-cap override to provide flexibility should the village find it “impossible” to achieve remaining below the tax cap.
“There is no need for the override anymore,” Bartels said.
The village election saw Trustee Ray Herbert and Bertels reelected in an uncontested election, where a total of 37 votes were cast.
Village Attorney John Ritter commented that the low turnout is a testament to the village board’s work and satisfaction among its residents—remarking that “nobody exercises their right to vote twice.”
“In villages where residents are unhappy with what is going on—election night is a zoo,” Ritter said.
According to the village website, there are approximately 1,350 residents in the village.