Lovers of Greek cuisine are jumping for joy now that Pita Station has established its roots within the hamlet of Manhasset. Gyro enthusiasts have not been able to get enough of the large variety of classic Greek dishes offered by the popular eatery. Owned by business partners Pantelis (Peter) Mountrakis and George Vatakis, after opening a successful Glen Head location in 2014, the duo opened another on Plandome Road.

Pita Station first broke onto the Long Island eatery scene when the primary location opened right across from the Glen Head LIRR station. Mountrakis and Vatakis decided on Manhasset as the new spot for their second restaurant due to the lack of quick-serve eateries. “There weren’t many,” said Mountrakis. “Manhasset has an abundance of sit-down places but nowhere to stop and get a quick bite to eat.”

Pita Station took over the Plandome Road spot that had housed two Italian restaurants. “It’s not the location, because it’s great,” said Vatakis. “Maybe people just want the other type of classic food.”

Pita Station’s menu offers a variety of gyros that can be eaten in a platter form as well as in a pita. Signature Greek dishes such as the obvious gyro, salads as well as different meat platters are some of the biggest hits the restaurant has to offer. Offering a large variety of both Greek and non-Greek dishes has allowed customers to pick and choose what they are in the mood for that day. But what has attracted customers the most is the traditional foods offered, said Mountrakis. “It’s the way it’s done in Greece; and you can’t beat that.” 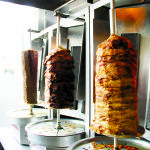 The gyro spot can get very crowded at times, especially during the lunch hour, and with its close proximity, neighboring businesses have found a reliable and pocket-friendly spot to feast.

Gabriel Pomerantz, a staff member of the local movie theater, said, “I was never really a fan of Greek food, my friends would always eat it, but I never tried it.” It was only after Pita Station opened up a few doors down that he began to grow curious. “I went in one day and I thought ‘what the heck?’, might as well try it, and I haven’t looked back since.”
If you’re wondering if the owners have their own favorite dishes to recommend, they do. Vatakis said the mini-pita is his go-to. Stuffed with gyro meat, tomato, red onion, tzatziki and a hint of Greek hot sauce, he said you can’t go wrong. As for Mountrakis, he enjoys the mini-pita as well only with his own twist, topping it off with a handful of crispy, fresh-cut fries before devouring it.

With the instant success of their second location, talks of opening a third location have commenced. Although Mountrakis and Vatakis are not sure where the new station will be, they do share the common hope of one day opening one up in Manhattan. “We did Manhasset already, maybe the next place will be Manhattan,” said Mountrakis, smiling.
Pita Station is located at 444 Plandome Rd. and is open seven days a week from 11 a.m.
to 9 p.m.