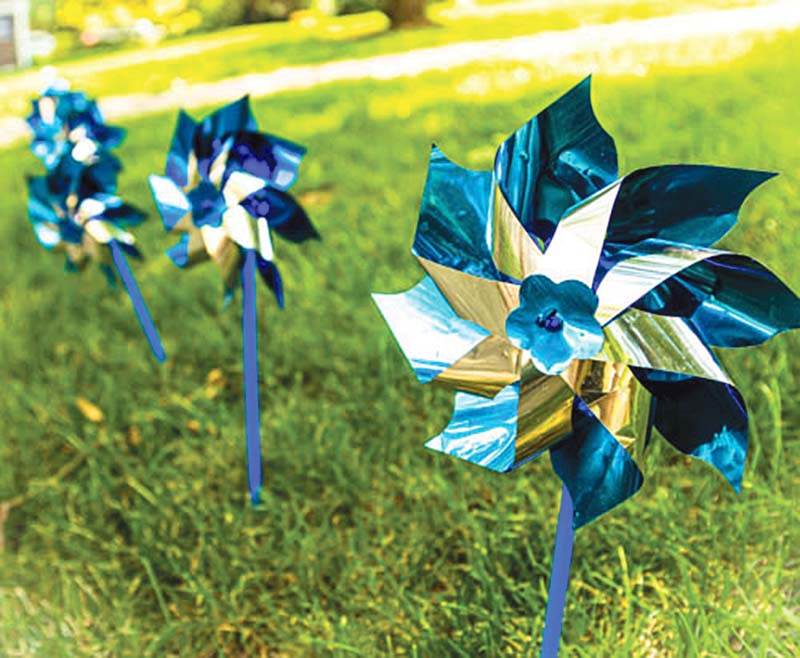 In the last decade, 725 New York children deaths have been kept hidden by Child Protective Services, according to the Times Union. Eighteen more have been killed by their own parent.

One of them was Franchetti’s daughter, Kyra Franchetti.

Franchetti’s 2 year-old daughter Kyra was with her father in Virginia on a court-sanctioned visit when he shot her twice in the back. He then proceeded to set his home on fire and killed himself as well.

Jacqueline Franchetti has turned her nightmare into a cause for change, specifically for the family courts system in New York. The Manhasset resident has gone up to Albany to testify and lobby on the matter, previously working on a federal resolution passed in the House of Representatives last year, but has yet to be taken up by the Senate. She currently is working on getting three different bills passed in New York State to help reform the family court system and protect innocent children.

The Pinwheels for Prevention event will start on what would have been Kyra’s seventh birthday, April 4. Each pinwheel at the park will represent one child that has been lost in New York State due to family violence and abuse. Kyra’s Champions will be offering seven pinwheels for $28 on their website, kyraschampions.org.

“These are both the parks where Kyra used to play all the time. I have wonderful fond memories of her there,” Franchetti said. “To see these pinwheels at the parks is going to mean a lot to me. My hope is that what these do is open the conversation for really a larger story here. Family violence and child abuse happens behind closed doors. We don’t often talk about it, but if we don’t discuss this, how many more children will die? How many more children are going to be abused?”

“These pinwheels are a fitting tribute to celebrate and honor Kyra’s life and legacy. Each of the 743 pinwheels honor the memory of the children who tragically lost their lives due to child abuse,” Councilmember Veronica Lurvey said. “The town is proud to be able to join Kyra’s Champions to bring attention to National Child Abuse Prevention Month and to have these blue pinwheels at two of Kyra’s favorite parks.”

Franchetti is hoping that her activism will make sure that no other child will have to go through what she did.

“I had ended the relationship when I was pregnant with Kyra at the time,” Franchetti said. “It was an abusive relationship and similar to many others who have been in abusive relationships, you leave many times before it’s final. I left to keep Kyra safe. Many abusers will use the family courts as another way to not only abuse the other person, but also, it’s all about power and control. He wanted to use the family court system as a way to torture me. Ultimately, he used it as a way to murder Kyra.”

After Kyra was born in April 2014, Franchetti found herself in family court a month later fighting for custody. She also warned the judge that the father was abusive, cursed at her in front of Kyra, stalked her and was not following medical directives for Kyra. The judge, Danielle Peterson, told her to “grow up,” and at the last court hearing, said, “this is not a life or death situation,” according to Franchetti.

Franchetti was rebuffed by Peterson after trying to set up a meeting in the wake of Kyra’s death. She believes that the court is not set up to protect children, but protect those that may endanger them.

“Family court is not a place that you’d want to be,” Franchetti said. “I was shocked to find out that our court system is set up to protect the abuser and not the child, and that needs to change.”

Franchetti is now focusing her activism at the state level to make changes that could have saved Kyra’s life and others in the future. Pinwheels for Prevention is one event she is hoping that can make real change and provide words to a silent conversation.

“Kyra’s Champions is an outstanding child safety and advocacy group which works to bring attention to promote and protect those children who are at risk of family violence,” Supervisor Judi Bosworth said. “We are so glad that we could honor Kyra on what would have been her 7th birthday by working to bring more attention to National Child Abuse Prevention Month.”