Mount Olive Baptist Church and affordable housing developer Georgica Green Ventures agreed to a contract for 72-units of senior affordable housing on the church’s property in 2012. Seven years later, the deal is on the cusp of never happening. For Part III, click here.

Minnie Carpenter, a resident of Pond View Homes who has lived in the area for 56 years, remembers people in hazmat suits coming to Olive Hill’s contaminated 3.1 acres digging and inspecting the area 20 years ago. She did not know why they were there, but rumors started to swirl.

“The hearsay that we heard in the community was that the water was contaminated with cancer or something like that,” Carpenter said. “Some people were saying that the water had cancer because a lot of people were getting cancer and [were] on dialysis.”

Carpenter herself has spent the last 20 years getting dialysis three times a week, and had uterus cancer in 2010. She is currently fighting stomach cancer, which she was diagnosed with in 2017. 20 years ago, she remembers that of the people in apartments one to 10, six of them had cancer and at least four were on dialysis.

Desiree Woodson, another resident of Pond View Homes, tenant representative for the North Hempstead Housing Authority (NAAH) and chairwoman of the Manhasset-Great Neck Economic Opportunity Council (EOC), calls the area of Spinney Hill and Pond View a “cancer cluster.” She believes that 20 to 30 people, if not more, have battled cancer in the area that she knows of.

Woodson was recently diagnosed with colon cancer in May, but says she was lucky the doctors found it early and it was contained. She was previously diagnosed with bladder cancer on Dec. 4, 2004 at the age of 31, but doctors were also able to find it early. Now, she’s worried about the kids that live and play in the contamination zone and wants it cleaned up.

“I really believe it made me sick,” Woodson said. “I want it cleaned up, I could care less about what goes on it. The church needs to be responsible and clean it up.”

“There is no contamination, where is the evidence,” asks Mt. Olive Baptist Church Rev. Edward Corley.

After the church and GG Acquisitions (GG) agreed to a contract to develop the site for senior affordable housing in 2012, GG applied to the Brownfield Cleanup Program ran by the New York State Department of Environmental Conservation (DEC). The site was previously used by LILCO from 1929-60 as a natural-gas hortonsphere site before the church bought the property.

The DEC agreed to clean up the contaminants on the site as part of the Browfield Cleanup program after finding semi-volatile organic compounds (SVOCs), metals typically found in ash in site soils and low levels of volatile organic compounds (VOC), such as trichloroethane and tetrachloroethane in the soil vapor. A previous study in 2011 by GEI Consultants also found chromium, lead, mercury and zinc in the soil above DEC standards.
There has also been illegal dumping on the property since the church has owned it that has led to some contaminants, as noted in the DEC’s online database.

“[Landscapers] try and do it when nobody sees it,” Carpenter said. “The trucks going up the hill have garbage in it and when it comes back down, it’s empty.”

“If that property has caused anybody [cancer] and they can prove that, I would be the first person to scrap the project,” Corley said. “I would be more concerned about a person’s health than a project on that property. Money means nothing to me, if people are getting sick because of contaminants on the church’s property, we need to correct that, but that has never come to my attention.”

No one is asking the church not to do the project, but that the contaminants get cleaned up. The Brownfield Cleanup Program has not started because it’s tied to the contract going through between the church and GG, but that may never happen if the courts decide the contract is null and void. The church would then need to reapply for the Brownfield Cleanup Program or find a private entity to clean up the site.

“If those issues or allegations are true, of course we care,” the church’s attorney Rev. Monte Malik Chandler said. “I am certain that if the church was faced with the issue, with real proof, of a cancer cluster we would certainly connect with the people at the Brownfield Cleanup Program.” 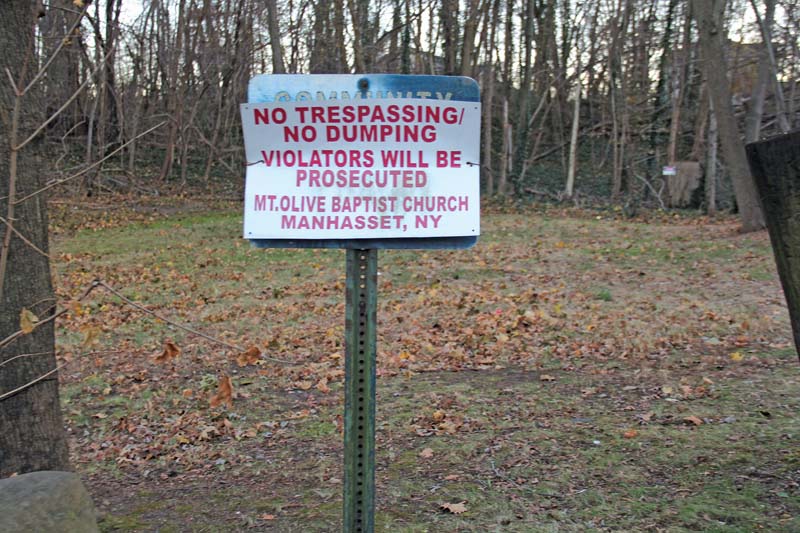 The site is currently only fenced in on the Spinney Hill side of the property, but it is fairly easy to jump over. The High St. part of the property is completely accessible. There is a “no trespassing” sign on High Street, but it says nothing about contaminants on the property or the danger that they might impose.

“Certainly, there [are] portions that have higher levels of contamination to certainly be fenced off,” NAAH executive director Sean Rainey said. “We even have our own maintenance guys cleanup debris around it, but the property should be fenced in. Nobody should be allowed back there if there is any chance of contaminants.”

While GG was applying for rezoning the property with the Town of North Hempstead, there was a public hearing on Nov. 18, 2014 and an exchange between Director of Adventure-in-Learning Diana Holden and Corley took place:

“They walk through there and they have found things in there that are not nice,” Holden said in response.

“The kids have told me this,” Holden said.

When reaching out for comment about a potential cancer cluster in the area, NYS Health Department spokesperson Jeffery Hammond said, “There are no immediate public health concerns at the Olive Hill site because the contaminated soil is below vegetation on vacant land.”

The contaminated soil is not the only thing residents are worried about, there have also been sightings of a coyote on the property as well.

“There is a coyote in there right now and that’s another issue,” Rainey said. “Our residents are very worried about the coyote living in there. I called the DEC—it’s a coyote.”

For Part III, click here. The continuing series will look at the two appraisals done by the church and the appellate courts decision.