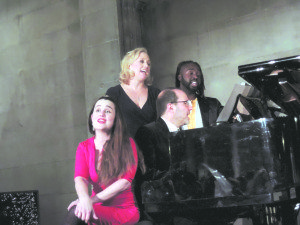 A jewel in the backyard of the Gold Coast is the Sands Point Preserve Conservancy and the historic Hempstead House is host to the best on Broadway and so much more including Not Quite Christmas Cabaret.

The show produced and hosted by Tony Award-winning composer Steven Lutvak is gem that few get to experience in such an intimate setting at the breathtaking Winter Living Room in the Gatsby-era mansion with blazing fireplaces and Christmas finery, This wonderful holiday tradition brings fantastic cabaret music to the doorstep of the North Shore bringing three amazing Broadway artists Lauren Worsham, Mykal Kilgore and Sally Wilfert to delight the senses.

Worsham brings you to tears as she expresses her passion emoting the deepest of emotion in her performance. She has previously starred in Broadway productions of Spamalot and Gentleman’s Guide to Love & Murder, for which she earned a Tony Nomination and Drama Desk Award for Outstanding Featured Actress in a Musical. Worsham also starred in the New York City Opera’s Candide and The Turn of the Screw, and the New York Philharmonic’s production of Showboat.

Lively Kilgore, quite garrulous in the preshow Q&A, makes a bold statement in his performance giving his heart and soul to the lyrics he brings to life. His credits include NBC’s The Wiz Live; Motown the Musical and Hair on Broadway; and the national tour of The Book of Mormon. He has performed in sold-out concerts at Joe’s Pub, Birdland, The Kennedy Center and Apollo Theater’s Cafe. 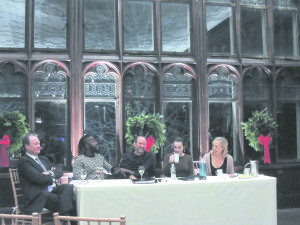 Wilfert, a talent unparallelled, takes the audience by the hand as she caresses them with her voice and plunders their sole. Wilfert was in the Tony Award-winning production of Assassins on Broadway and the national tour of The 25th Annual Putnam County Spelling Bee. At Carnegie Hall, she appeared in Cole Porter’s Jubilee, South Pacific in Concert and Sondheim: A Tribute, all for PBS. Her cabaret concert venues include 54 Below, The Allen Room, Jazz at Lincoln Center, Joe’s Pub and Birdland.

For information on becoming a member of the Sands Point Conservancy, visit www.sandspoint preserve.org or visit the Gatehouse at 127 Middle Neck Rd. in Sands Point, open daily at 8 a.m. to 5 p.m.