With the Independence Day weekend almost upon us and boaters busy planning their weekends on the water, the Town of North Hempstead today joined with other law enforcement bodies from throughout Nassau County, State elected officials and the Nassau County District Attorney to warn residents about the dangers of Boating While Intoxicated (BWI). 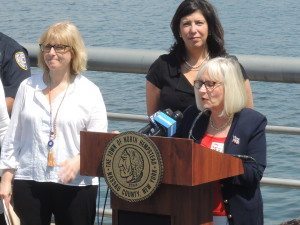 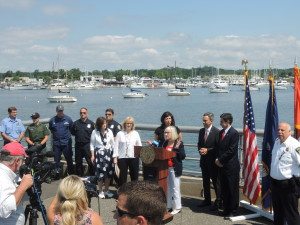 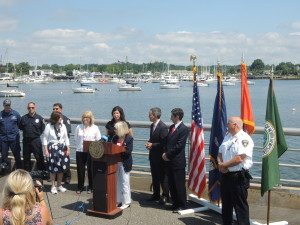 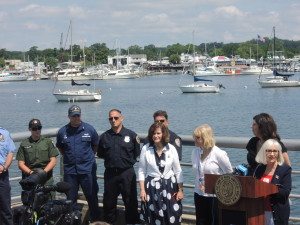 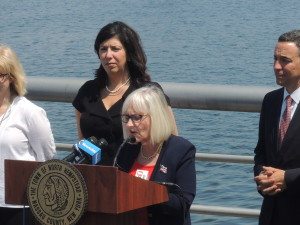 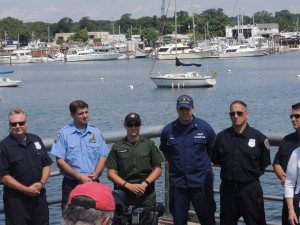 “By having our Town Bay Constables, neighboring marine patrols and law enforcement all gathered here today overlooking Manhasset Bay, we are sending a clear message to anyone thinking of drinking and operating a boat—don’t do it,” North Hempstead Town Supervisor Judi Bosworth said.  “We will be out there in force keeping the waters safe for all recreational boaters. And if you choose to ignore the warning, you will be arrested, and could face both fines and jail time.”

“Fourth of July is a time for friends, family, barbecues, visiting the beach and enjoying a boat ride,” Nassau County District Attorney Madeline Singas said. “But for many of us in law enforcement, this is a busy weekend. The number of Boating While Intoxicated incidents skyrockets during the holiday. Boating While Intoxicated or impaired by drugs is extremely dangerous and illegal, and it is the leading cause of fatal boat crashes. Our partners here today are increasing enforcement this weekend and will arrest you if you endanger yourself and others by operating a boat while you are impaired.”

In New York State, you will be arrested for BWI for operating a boat, Jet Ski, or other watercraft with a blood alcohol content of .08% or higher.  The punishment for a first offense of boating while intoxicated (a misdemeanor) is a maximum of one year in prison, a fine of no less than $500 and no more than $1,000, or both fine and imprisonment. Second and third offenses within specific time periods are felonies and have harsher penalties.

State Senator Martins stated: “Drunk driving endangers lives regardless of whether you’re operating a car or boat.  The State Legislature recently acted to ensure that individuals’ prior convictions of operating a motor vehicle while intoxicated are considered when they commit another offense, regardless of the type of vehicle they’re driving. This is a positive step forward in keeping our families safe. New York State, the Town of North Hempstead and our partners in law enforcement take these crimes very seriously. Don’t find that out the hard way; be safe and designate a driver.”

State Assemblywoman Michelle Schimel said: “A boat ride should be a fun, safe, and enjoyable outing. Tiffany Heitkamp’s Law is named for a young woman from Syracuse who was killed on a vessel operated by an intoxicated boater with a long record of DWI’s (driving while intoxicated). This legislation directs judges to consider previous DWI convictions upon sentencing BWI defendants and sends a clear message: ‘DON’T drink and drive, and DON’T drink and operate a boat.’”

Law enforcement agencies on hand included representatives from the United States Coast Guard, the North Hempstead Harbor Patrol, Town of Oyster Bay Harbor Patrol, the City of Glen Cove Harbor Patrol, the New York State Department of Environmental Conservation, and the Port Washington Police Department.
Supervisor Bosworth also informed residents about some staggering statistics regarding accidents on the water.  According to Recreational Boating Statistics, an annual report that contains statistics on recreational boating accidents, in 2014 the Coast Guard counted 4,064 accidents that involved 610 deaths, 2,678 injuries, and approximately $39 million of damage to property as a result of recreational boating accidents.

For more information on safety tips and navigation rules, please call 311.  You can access the tide table for Manhasset Bay by logging on to www.northhempsteadny.gov/Harbor-and-Marine.