Pastor of St. Mary’s leads with a Strong Vision, Part 1

(Part 1 of 2)
Reverend Monsignor John J. McCann, pastor of The Church of St. Mary, is celebrating 50 years as a priest and his retirement as pastor, a role he has held for 17 years.

The celebration is being held at the North Hills Country Club in North Hills on Friday, May 29, at 6:30 p.m. On Sunday, May 31, there will be a celebratory mass at 12 p.m. Bishop William F. Murphy will be celebrating mass along with Bishop Robert J. Coyle and Monsignor McCann. All the religious of The Church of St. Mary will be in the procession. There will be a reception outside after the mass and all are welcome. The official date of Monsignor’s retirement is June 24.

Monsignor McCann grew up in New Hyde Park. When he was in high school at St. Mary’s High School in Manhasset, his family moved to Glen Head. Monsignor McCann attended St. John’s University and the Seminary of the Immaculate Conception in Huntington. When asked why he decided to become a priest, Msgr. McCann said he was inspired by “the example of good priests, and I felt this is what the Lord wanted me to do.” The seminary is honoring Monsignor McCann at their golf outing in July.

Before coming to St. Mary’s, he was at St. Patrick’s in Glen Cove for 25 years. He was named a monsignor in 1991, while at St. Patrick’s. At that time, he was dean of the Oyster Bay Deanery. He held the position of dean of the North Hempstead Deanery until about two years ago.

Msgr. McCann also served on the Long Island Catholic Board, the Catholic Cemetery Board and was chairperson for several years, the Diocesan Loan Account Board, which became the Mission Assistance Corp. and, at present, he is the president, the Inter-diocesan Religious Retirement and Stipend Board and the Diocesan Building Committee.

Msgr. McCann’s success as pastor of The Church of St. Mary comes in part from his ability to identify a problem, identify the solution and follow though. Msgr. McCann played an critical role in upgrading and expanding the building facilities for the schools of St. Mary and the church. At the time, church offices were in the rectoryand pre-K was in the basement of the church. There was a road immediately behind the back of the church before the parking lot.

“When I first came to St. Mary’s,” said Msgr. McCann, “I tried to find out what the needs of the parish were. The response that invariably came back was ‘space.’ Ten months after I came here, I formed a building committee to analyze the needs of the community. At that time, Wiest Hall, the old elementary school gymnasium, had structural problems. We took Wiest Hall down. We put the gym underground. Now we have a full-size basketball court.”

Msgr. McCann had a vision for St. Mary’s, which has been in Manhasset for 160 years. He initiated the fundraising efforts with a goal of $10 million. They ended up raising $14 million. Eileen Symmons, director of communications at The Schools of Saint Mary, said “under Monsignor’s leadership, a $10 million commitment campaign was launched to renovate the school and church. He exceeded that $10 million and raised $14 million.” Symmons has worked in her position as director of communications for eight years.

Parishioner Marc de Venoge said, “Msgr. John McCann is the very rare pastor that possesses deep spirituality, compassion, intellect and visionary ideas. Soon after his arrival at St. Mary’s, Monsignor envisioned a capital project more significant than anything here since the 1950s. From the compassionate observations that our kindergarten students did not have enough sunlight in their classroom, and parishioners lacked handicapped access to the church, Msgr. McCann worked tirelessly to devise a revitalized vision of the church and parish campus. The wildly successful project rebuilt the entire back of the church with a handicapped elevator, added significant space for parish community activities, revamped and expanded the elementary school and added a gymnasium that gets tremendous use by the schools and community CYO programs.” 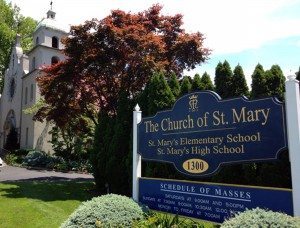 Vincent Hartley, facilities manager for 10 years, has known monsignor since 1974. Hartley lives in Glen Head and he and his wife were married by Msgr. McCann. “I knew him when he was at St. Patrick’s. When the other pastor became ill, Msgr. McCann ran the parish. He was the business manager in residency. Then, the bishop made him pastor. Msgr. McCann is one of the few religious people that can envision changes to things like buildings and facilities,” said Hartley. “He can explain his vision to the architect who can then put it on the page. When he came to take over St. Mary’s, the high school building was in need of a lot of work and the elementary school was busting at the seams. He redesigned the elementary school and reconfigured and expanded the parking lot. He got rid of the pastor’s house and renovated the rectory so the priests could live there. He added a playground. My background is in business, and I can say that very few people can do what he does. If he wasn’t a priest, he would probably be the COO or president of General Electric.”