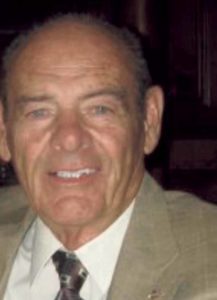 Mr. McGuire was born in Astoria, Queens on April 26, 1926 to Agnes (Killion) and Lawrence M. McGuire. He was the second oldest of nine boys raised by the couple.

In 1944, at age 17, he enlisted in the United States Navy with his parents’ signed permission. He completed his basic naval training in Sampson, NY and then traveled to Hingham shipyard in Massachusetts to board his assigned ship, LST 919, as an anti-aircraft gunner.

After shakedown cruises up and down the East Coast, he passed through the Panama Canal and eventually entered the South Pacific as part of the 7th Fleet’s Amphibious Force, commanded by Admiral Kinkaid and General MacArthur.

He saw action almost immediately and continuously while participating in most of the remaining major naval battles of the Pacific Campaign. While there, he earned five battle stars for his service at Saipan, Leyte Gulf, Mindoro, Iwo Jima and Okinawa.

When the war ended, he was assigned to occupation duty in China and then returned home where he completed his education.

Following in the footsteps of his uncle James Killion and older brother Lawrence McGuire (Larry), he was sworn in to the New York City Police Department on March 1st, 1950. He worked with Larry in the 25th Precinct in Harlem until his promotion to Sergeant in 1960.

One of his proudest professional moments came in March of 1958 when he was awarded the “Meritorious Police Duty” medal for saving a troubled young woman’s life by luring her away from an apartment building ledge while offering her the rosary beads he carried to work each day. As she reached for them, he was able to pull her back inside the apartment window.

Upon promotion to Sergeant, he was then transferred to the 13th Precinct in Gramercy Park where he served as a patrol supervisor and instructor at the Police Academy.

In June of 1968, he was promoted to Lieutenant and assigned desk officer duty in the 28th Precinct in Harlem. After two months, he was detailed to the Inspectional Services Bureau and Intelligence Division as a Lieutenant, SA (Special Assignment). While in this position, he earned the reputation as one of the department’s most trusted and diligent investigators, often being called upon to handle its especially sensitive and important cases.

He was then promoted to one of the most prestigious designations in all of law enforcement: Lieutenant, CDS (Commander of Detective Squad). He served in this distinguished position from 1972 to 1988. At the time of his retirement, he was not only the longest serving active duty Lieutenant in rank but also the longest serving member of the NYPD.

Upon his retirement, he and his wife of 44 years, Marion, would split their time between Manhasset and Vero Beach, Florida until her death in 1995. He then moved to Florida permanently the following year.

Over the years, he was very active in various organizations,including the American Legion, VFW, Boy Scouts of America, and Saint Mary’s Parish.

His experiences growing up during the Great Depression, fighting valiantly in World War II, and serving the New York City Police Department for nearly 40 years earned him the unwavering affection and admiration of his peers, returning veterans, and the young people he mentored. He was a great friend to those in need and was known for his impeccable integrity, character, work ethic and deep Catholic faith.

In 2004, he married Betty Nichols Stinnett who was warmly welcomed by his family. They remain grateful to her for her steadfast devotion to him. She filled the autumn of his life with much happiness and was by his side to the very end.

Funeral mass to be held at St. Mary’s in Manhasset on Thursday, Feb. 8, at 11:15 a.m. Interment immediately following at Calverton National Cemetery. 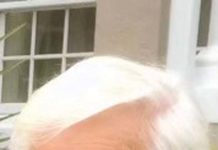 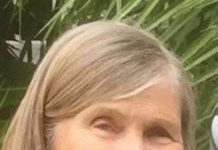