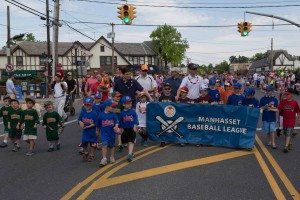 Matthew Falcone, commander of the Manhasset Post 304 American Legion, and James Brooks, parade chairman, have announced the parade order and schedule for the 2015 Manhasset Memorial Day Parade and Memorial Service. All Manhasset residents, their families and friends are invited to join the legion in this remembrance of the great sacrifices of our American heroes. While Memorial Day honors all deceased veterans, the theme of the parade this year is “The Greatest Battles of World War II: 70 Years Later, Lest we Never Forget.”

Memorial Services
A memorial service in honor of Manhasset’s war dead will be held at the Church of Our Savior Lutheran, 1901 Northern Blvd., on Sunday, May 24, at 10 a.m.  All are urged to attend and to join with the legion in the remembrance of the great sacrifice of our military.
The legion and Boy Scout Troop 97 will place American flags on the graves of veterans in local cemeteries and will participate with other legion posts in decorating the graves at the Long Island National Cemetery in Pinelawn.
The American Legion has also donated American Flags which will be placed on the street light poles along Plandome Road.
Before the parade begins, the Manhasset-Lakeville Fire Department will honor veterans by placing wreaths at the Gold Star Monument and at the Memorial Field Veterans’ Monument.

The Parade
The Memorial Day Parade begins promptly at 10 a.m. There are over 25 organizations and four bands scheduled to march. The parade will include over 20 trucks from the Manhasset-Lakeville and Plandome Fire Departments.
During the parade the American Legion will place wreaths at both the World War I Memorial and the Gold Star Monument on Plandome Road.
The route of the parade will be along Plandome Road from Plandome Court to Memorial Place with excellent public viewing along the entire length.