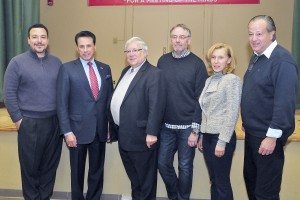 The Village of East Hills was the place to be early last month as the village and its mayor, Michael R. Koblenz, hosted a “Meeting of the Mayors,” a program that attracted not only mayors from the North Shore, but also New York State and Town of North Hempstead officials, plus noted economists and government specialists.
The day featured talks on the legislative process, shared services, rebates and an update on legislative action from both Albany and the Town of North Hempstead.
Mayor Koblenz welcomed the attendees with an upbeat statement.
“Welcome to the First Meeting of the Mayors,” Koblenz began. “I hope our meeting will be informative and valuable. This meeting presents my friends, the mayors and government officials in the greater Roslyn area, an opportunity to meet together, discuss together, and work together on issues of mutual concern.
“I am delighted that the following leaders, experts, and colleagues join me: Senator Jack Martins, Assemblyman Charles Lavine, Mark Pattison (director of Local Government Services at the Department of State), Carl Ublacker (project manager at the Department of State), William Burton (Village Attorney of East Hills), Alan Yu of Cullen & Danowski, Supervisor Judi Bosworth of North Hempstead, Councilman Peter Zuckerman of North Hempstead, Rachel Brinn (director of Administrative Affairs of North Hempstead), Mayor John Durkin of Roslyn, Mayor Jeffrey Schwartzberg of Roslyn Estates, Mayor David Mandell of Roslyn Harbor, Mayor Elaine Phillips of Flower Hill, Deputy Mayor Robert McNamara of Flower Hill, Mayor Fred Carillo of Old Westbury and Kenneth Callahan (Village Administrator of Old Westbury).
“Today, mayors in the greater Roslyn area have many issues in common, whether it is the planes that fly overhead, over-construction, or just overhead expenses.
“In a world of raising cost we all want to find savings,” the mayor continued. “We all want to stay within the 2 percent or less in increases taxes whenever possible. One means to realize savings is through shared services. Thanks to the governor’s initiative, if we stay below the cap and cut our costs, we can allow many of our residents to get tax rebates. It is a prize worth pursuing. Indeed, the village portion of every tax bill is rather small, and consequently, so are the rebates. But their meaning and significance looms large. They are a symbol to similar taxing entities. If we succeed, we will be an example to all taxing entities, whether it’s county, town, or schools. The combined tax rebate of all these municipalities could be a couple hundred dollars or more. However, whether or not each of us is able to get the rebates, our message is the same: Cut our costs whenever and wherever possible.
“This meeting is, therefore, designed to explore the means to find savings by sharing together our services,” Koblenz concluded. “It is also an opportunity to understand in full Governor Cuomo’s tax rebate plan approved by our State Legislature and enacted into law. It is a way to work together on issues and programs we are confronting, and the policies we want to champion in unison.”
Mark Pattison gave a talk on shared services, while Alan Yu spoke about rebate programs. Jack Martins and Judi Bosworth kept the participants abreast of services offered by both New York State and the Town of North Hempstead.