As we enter the Olympic season, many of us will tune in to watch track and field, a centerpiece of the games and one of the oldest and most popular sports worldwide. In spite of this spike in interest every four years, the sport is still frequently misperceived as an individual endeavor, instead of as the quintessential team sport that it is. Fortunately, the recent success of Manhasset’s varsity track and field program is helping to dispel this notion. As the start of this spring season, Manhasset’s squad entered with some lofty goals after finishing last year as division and county team champions. However, the loss of some key point scorers, who were seniors to graduation meant that several individuals would need to step up for the team to replicate this success. Ultimately, not only did this year’s group make up for these key losses, they took things a step further, establishing numerous Manhasset age-group and all-time records en route to another championship season. This year’s squad claimed their fourth consecutive division title and second consecutive division title and second consecutive team County Championship, and did so in convincing fashion. 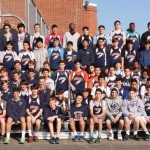 The division meet, hosted by Great NeckNorth High School, was dominated by the Indians, who scored in all but one of seventeen contested events. At its conclusion, even a slight rain could not put a damper on the team’s resounding victory– scoring 155 points, more than the second and third place finishing teams combined. Hurdler Michael Chin’s second place finishes at both 110HH (16.6) and 400m (61.9) to go along with his fourth place finish in the Triple Jump, paced all Manhasset scorers with 20 points. With so many exemplary performances, it is difficult to single one out, however sophomore Ryan Watson most assuredly rose to to the occasion. Using a strong kick over the final 200m, Watson took the individual title at 1600m in a personal best time of 4:32– tops among all sophomores in Nassau County this season.

Other notable performances included fellow sophomore distance runner Aidan Caggiano, who claimed his first Division title in 3200m (10:21), leading a trio of Manhasset runners: Ryan Watson (second-10:28) and Milton Pirsos (third- 10:37) across the finish line for a sweep of the event. Senior Tim Courts, who had missed all of the previous week due to illness, returned to score valuable points in the 1600m (second) while also anchoring the 4x800m relay team (accompanied by Nicky Harris, Michael Lee, and Ryan Thorpe) to a third place finish. Junior Daniel Petruso used his blistering finish kick to earn third place and All-Division honors in the 800m (2:04), while sophomore Jallah Stephenson stormed down the final straightaway to record 52.4 time and take home second place in the newest event added to his repertoire, the 400m. The team’s success, however, would not have been possible without major contributions in the field, sprints and relays as well.

Junior thrower Gavin Olsen collected 16 points, taking the top spot in the shot put (48’8.5”) and picking up third in the discus (103′), while junior newcomer Najon Dorsainvil matched his season best in the high jump, leaping 5’8″ to earn four valuable team points. Freshman Ricardo Brown added in 8 points, finishing third place in the 100m (11.0) and returning to earn fifth at 200m (23.2) as Tom Butcher also scored in multiple events, including an All-Division performance in the 400m IH (62.8). The 4x100m relay (Dorsainvil, Brown, Jason Singh, Stephenson) and 4x400m relay (James Bellucci, Alex Mazer, Michael Lee, Jack Cyprus) both earned second place finishes to put the finishing touches on a true team victory. In retrospect, that these achievements were only a foreshadowing what ws to come.