The study of the martial art Soo Bak Doh had its black belt testing in December at Kwon’s Wellness’ final testing event of the year. The testing had 60 students participating across white, orange, green and red belt tests. What made the event special was the promotion of seven students to black belt. 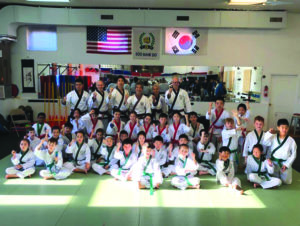 In martial arts, it’s important to have excellent physical talent. However, Kwon’s Wellness also emphasizes several mental disciplines as well, so that students are able to build good habits and excel every single day in and outside of the studio. 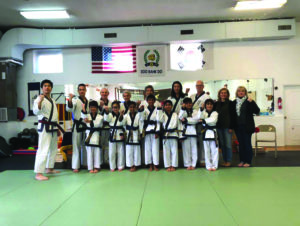 Students study to learn such disciplines as courage, concentration, endurance, and to demonstrate these mental skills while performing kicks and punches.
After several years of training, students are eligible to test for their black belt. All of Kwon’s black belt students have been training for an extended period of time, the longest being six years having begun with the tots program. These young students have demonstrated that they are great role models and will be bright future leaders.
At Kwon’s, “we expect to see continued growth from our students,” said Master Dae Kwon. Michael DePietro, Jessica Abraham, Samuel Abraham, Kiley Wong, Nicholas Gigante, Rishi Saini and Ishaan Midha successfully became black belts and received their new uniform and belt.
“In addition, one of our instructors, Eric Chung, who joined the Kwon’s Wellness team in August, was also promoted at the event to third degree black belt,” said Kwon. “Eric has been training since 2005 and now embarks on his journey to become a master level instructor when he becomes eligible to test for fourth degree black belt in 2022.”
Established in 1990, Kwon’s Wellness is located at 8 Hillcrest Ave. in Manhasset.