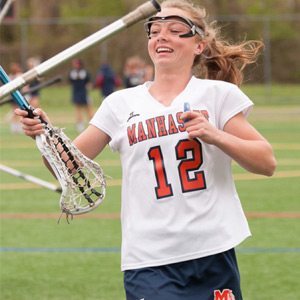 To some teams, winning a county championship is a reward for hard work and perseverance. For Manhasset girls lacrosse, being named Nassau County champs is as routine as the academic year coming to a close.

The Indians are coming off another successful year, 16-4, that saw them defeat Garden City 14-8 to win their sixth county title under Head Coach Danielle Gallagher. They went on to defeat Eastport-South Manor 11-7 to claim the Long Island Championship. They moved on to the NYS tournament, but had their run end in the semifinals to Brighton in a 9-8 thriller. The victory over Garden City was especially rewarding because they had not only lost the 2012 county finals to the Trojans, but also suffered a 10-9 regular season defeat in double OT to them on April 11.

The team will be without four of their key players from last year, and 10 seniors in total, but Gallagher is “very confident in the current group of upper classmen”. The team will be returning three All-Americans from last year’s squad; Julia Glynn, Natalie Stefan and Lindsey Ronbeck. All three players will be counted on to lead the Indians back to the top.

Glynn, a senior and four-year varsity player, will be playing collegiately at Harvard in the fall. “She will have an impact on either end of the field,” said Gallagher. Stefan, also a senior middy, will be playing collegiately at the University of Pennsylvania. She will be playing there with fellow teammate Jackie Dalleva, a defender. Gallgher describes her as “very athletic and a strong presence on defense who often matches up against the best player on opposing team.” The third All-American, Ronbeck, is only a junior but is verbally committed to playing at the University of Florida.
Glynn and Stefan nearly single-handedly lifted the Indians to the Long Island Championship. Together, they combined for seven goals and one assist in the victory over ESM.

The Indians have experienced an unprecedented amount of success under Head Coach Gallagher. They will look to continue that success in the 2014 season which begins on March 21 against Plainedge. The Indians will attempt to defend their crown in a tough conference that features perennial powerhouses Garden City and Wantagh but the Indians have the talent to return to the top.