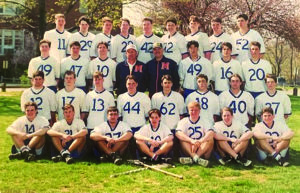 If lacrosse is a passion on Long Island, it’s a full-blown religion in Manhasset.

Over more than six decades, countless talented players have donned the Indians jerseys and taken up the sport at one point or another, writing their part in a time-honored tradition for Manhasset’s schools and the community as a whole. At the highest level of legend, Jim Brown stands alone, but even the NFL Hall of Famer couldn’t bring a state championship back home.

That took the young men on the 1995 Manhasset boys’ varsity team, who managed to hoist the trophy at the end of a magical season after thrashing Corning East 14-4 a little more than 25 years ago on June 10, 1995. For the people who took to the field for that team, the ’95 season was unforgettable.

“Of all the accomplishments that I’ve had and things that I’ve one, that goes down as one of the best looking back at it for me,” Danny Dennihan, who served as a captain for the team and led its potent attack in his senior year, said.

Dennihan spent that year as the focal point of the Indians’ offensive gameplan, quarterbacking the team’s attack from behind the opposing goal. But while Dennihan was a star in his own right, the two-time All American was by no means the only talented player that graced that championship team.

“We had so many good players,” Kevin Healy, the standout goalie for the ’95 team, said. “Since a lot of them were younger and didn’t always get the chance to play, we kind of came together as a team. In the beginning nobody really knew where they would fall, but we all kind of found our place and figured it out from one game to the next.”

Healy credits the team’s ability to have any of its players step up when needed to the coaching of longtime head coach and assistant tandem Alan Lowe and Bob Rule, who managed to balance out playing time enough on that super talented roster to keep everybody involved. And after a tough early-season win against Long Island rivals Garden City helped gel the team, the Indians wound up finishing 21-1 on the year, their lone loss coming to a Yorktown team they got revenge on in the state semifinals.

“It was huge,” Dennihan said of the reception. “It made for a very, very fun summer.”