The Manhasset boys varsity basketball team is on fire and are headed to the Nassau County Championship finals after destroying Elmont High School in the semifinals on Feb. 27. Earlier this season, the Indians faced off against the Spartans only to lose during regular season play. 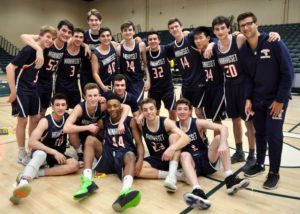 The boys ended the regular season with a strong victory over formidable Jericho, avenging an earlier season loss. Final Score was 58-47. Leading scorers were Chris Themelis (19), Thomas Santella (13) and Ahmad Crowell (12). They started the Nassau County “A” division tournament with a win over a very pesky Roslyn team, 61-59. Louis Perfetto led all scoring with 16, followed by John Mastando, Crowell and Themelis all with 11, and Joe Locurto with 10. This early playoff victory had a dose of miracle grow with it.
Next up South Side in the quarter finals. Manhasset fell behind 15-14 in first qarter by but took control in second quarter with Santella pouring in 11, and finished with game high 22. Locurto added 15 and Crowell had 11 making the final score 76-66. This victory brought Manhasset to the county semi finals verse a very tall and athletic Elmont. The Spartans had frequent appearances in the Long Island sweet 16 during the year, and had handed Manhasset two out of its three losses. Elmont presented a very big challenge for the Indians. The neutral sight and larger court did seem to help the smaller Manhasset squad.
The Indians clawed to a 9-7 first quarter lead with Perfetto and Santella taking charge. A crucial foul call to end the half allowed John Mastando to drain two free throws and Manhasset had a 29-24 half time lead. Manhasset bounded to locker room with confidence. The huge and boisterous crowd had a buzz, and seemed to attempt to try and snuff any second half run by Elmont. Ahmad Crowell and Thomas Santella combined for 18 rebounds and battled the taller Elmont front court. Manhasset came away with a monstrous 51-43 victory. The scoring was extremely balanced. No player that scored had more than 10, and no scoring player had less than five. A true reflection of basketball socialism. The victory, though, was rooted in defensive play, led by Perfetto’s four steals, and the overall tenacity exhibited by the front court. It should be highlighted that junior Cole Zaffiro (5 points) and sophomore Crowell (9 points) had crucial minutes down the stretch and played a significant role in this semifinal win. The team stands at 19-3, a truly outstanding basketball record. Manhasset will play Lynbrook for the Nassau County Final. No doubt the huge crowd, led by retired superintendent Charlie Cardillo and the Manhasset Maniacs (the not so invisible sixth man), enjoyed a very satisfying night at Farmingdale Community College. It has been a season to remember.
—Additional reporting by William Hannan
(photos by Maria Mastando)