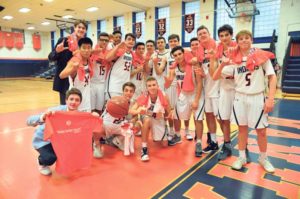 The Manhasset High School boys varsity basketball team has gotten off to a strong start to begin the 2018-19 campaign. With a number of seniors having significant playing time last year as juniors, the season did begin with some promise. As December has come to a close, this group of fine young men has fulfilled their early season expectation, and then some.

The first game was against private school upstart Portledge. Manhasset seemed to embrace its coming out party. First quarter scoring not only was robust, but well-rounded. Adding buckets were Joe Locurto, Chris Themelis, Louis Perfetto, Joe Busch, Thomas Santella, John Mastando and Ahmad Crowell. How often can seven players score in the first quarter of the season opener? Manhasset raced to a first half lead of 38-23. Portledge has a talented team and clawed back a bit. John Mastando caught fire in the third quarter with three 3-pointers. Things got wobbly in the fourth but the final was 72-64. Not only was the season underway, but these boys seemed proud to show their edge.

The second game faced Garden City, which won Nassau County last year. Manhasset ground to a 25-17 lead by half. Crowell and Santella asserted some rebounding acumen, leading that charge. Santella added three timely steals and Manhasset came away with a 50-46 victory. Santella was also the leading scorer with 17, Mastando adding 14 and Themelis 8. The game got shaky in the fourth with Garden City winning the final quarter 18-12.

Game three was home against West Hempstead. Manhasset asserted itself early with Mastando, Busch and Perfetto all getting hot hands in the first half. The half time score of 36-13 indicated the assertiveness of the Indian squad. A number of Manhasset players lit it up who had not on previous games, including Jonathan Kim, Marco Falcone, Cameron Kaye, Cole Zaffiro, Jack Doherty and Matt Donnell. The final score was Manhasset 74, West Hempstead 38.

In game four, Manhasset faced its near-town rival Port Washington. Mastando got hot early and stayed hot, scoring 11 in the first quarter and 16 for the half. Busch caught lightning in the second quarter, and scored a mind-blowing 14 points in that period alone, mesmerizing the home court fans with his shooting distinction. Manhasset was up by five points in the first half, 41-36. Manhasset seemed to pull away in the third, grinding to a 13-point lead.

But once again their opponent seemed to sense over-confidence and stole the fourth quarter. The Indians hung on to a 78-76 victory. Crowell and Santella had numerous crucial second half rebounds and Themelis added four critical points in the last period, enough to seal it. This was a vibrant, well fought game versus a strong Port team. The win seemed to give the boys the confidence that they could handle close game pressure.

The final two games in December were against Great Neck North and New Hyde Park. Santella led all scorers with 18 points against Great Neck, and Manhasset took the game 63-54. Once again, though, things got wobbly in the fourth until Perfetto and Santella seemed to say enough is enough. It wasn’t pretty, but Coach Bruns would take it. The year came to a close with an outstanding scoring display against New Hyde Park, with the Indians reaching the often tough to achieve “century” mark. While winning the game 101-77, many players added their scoring skills to the contest, including Locurto, Themelis, Dunphy, Perfetto, Kaye, Busch, Santella, Zaffiro, Crowell, Kim, Falcone and Dunnell. Steven Arella put the cherry on this blue and orange sundae, scoring the 100th and 101st points. The fans seem to enjoy the offensive displays and the wide range of contributors. Doherty added several rebounds in the paint.

While the Indians start five seniors, very active contributors are sophomore Crowell and juniors Busch and Zaffiro. The team has gotten off to a very eye-catching start, 6-0. Ball movement is a high priority, and the defensive play of players like Perfetto and Locurto seem to hold opponents in check when needed most. This is an unselfish team, a team that has each other’s back, a team that celebrates the contributions of all its members. There is no shortage of leadership among these boys. All these attributes should make for a very entertaining meet of the season. Come on down and cheer these Indians on.