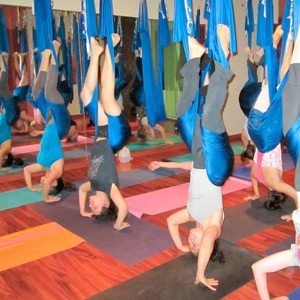 Fitness Loft, the 8,000-square-foot gym, located for the past three years on the second floor at 1447 Northern Boulevard (above TGI Fridays) may be symbolic of the owner’s goal: to aim higher than other area gyms. Owner Cynthia Conde, author of Bridal Bootcamp: Look Fabulous on Your Big Day was also the creator and host of 2010 reality VH1 TV show Bridal Bootcamp. For the past three years, her passion has led her to building an exercise center to meet the needs of the community.

“I really wanted to create a central place in the town where everyone knows your name,” said Conde. “I am constantly adding in something different and trying to diversify because what we don’t want is for people to lose interest – because let’s face it the average workout can get very boring.”

Fitness Loft offers the usual bicycles and treadmills you’ll see in a standard gym, but a variety of rooms offer myriad exercise.

“Everything for fitness is all here under one roof,” Conde said. There’s a weight room, hot yoga, bootcamp, pole dancing, Tabata and then some. Tabata, which has been around for many years, is gaining popularity. It’s described as a high intensity interval training workout broken up into small breaks using a series of changing exercises. According to Conde, you can get your cardio and strength training all in one. “Tabata is designed to get your stamina up very quickly,” she said.

Fitness Loft just reintroduced CrossFit to Manhasset, after another similar facility closed down earlier this year. This is a combination of Olympic lifting with gymnastic-type moves all in an hour-long workout. Conde says its very high intensity, more so than Bootcamp, which is designed for getting fit and dropping body fat. But Conde says the average person can do CrossFit and it’s geared for everyone—even people in their 50s. It includes pull ups and squats with weights. “It’s scaled down to people’s abilities and you can build up incrementally,” she said.

With the lack of fitness programs for children with autism and special needs, Fitness Loft plans to launch a Circus Aerial program for kids ages 6 to 15 years. This will be launched in time for April—Autism Awareness month. Parents are able to stay and bond with their child during this hour-long program. Working with a behavioral therapist who is also an aerialist, Conde has put together this weekly, ongoing program which will include aerial hammocks that lift kids a foot off the ground (all padded and safe). “It’s meant to be soothing, calming, embracing and stimulating – all at the same time – a great bonding opportunity for parent and child,” said Conde.

Fitness Loft hasn’t seemed to miss a beat as far as classes and programs go. They even appeal to the competitive fitness enthusiasts who want to get out there are race. The gym is an official Spartan Race Training Facility with teams of 75-100 people. Members have access to their indoor, army obstacle course and when ready to compete, Fitness Loft provides buses to transport members to locations as far as Vermont, New Jersey and upstate New York. It’s filmed and documented with amazing footage and imagery of the event, according to Conde.

Spring is drawing near and soon all the snow will melt. Get into gear and check out FitnessLoft.com for yearly memberships, class package cards and more.