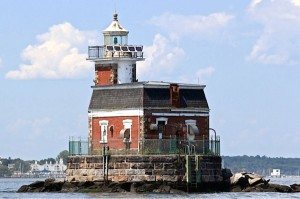 “We have a light upon our house, and it gives hope to all who sail upon the stormy seas. Do ya know what it means to have a light burning atop your home? It is safety, a place of refuge, seen by all that as a signal that ye stand for something greater than this world, greater than us all.” — James Michael Pratt, “The Lighthouse Keeper”

Imagine you have braved the wintry north Atlantic in a rough and tumble fishing vessel, or in the opulent elegance of a more modern ocean liner. Or, perhaps you’re just sailing your single-masted sailboat. You’re searching, through the darkest night, with ice crystals forming on your eyelids and a nor’easter bearing down on you, for some sign of a safe harbor.

Then you spot that beacon.

From 30 miles away you can see the lighthouse light. Sanctuary is spotted, safety, while not assured, is at least within your grasp.

Lighthouses hold a special place for people who love the sea. They’ve been around for a millennium and even today, with GPS and radar, they stand as sentinels of the night for sailors around the world.

In antiquity, the lighthouse functioned more as an entrance marker to ports than as a warning signal for reefs and promontories, unlike many modern lighthouses. The most famous lighthouse structure from antiquity was the Pharos of Alexandria, although it collapsed during an earthquake centuries later.

The intact Tower of Hercules at A Coruña and the ruins of the Roman lighthouse at Dover Castle in England give insight into ancient lighthouse construction; other evidence about lighthouses exists in depictions on coins and mosaics, of which many represent the lighthouse at Ostia. Coins from Alexandria, Ostia, and Laodicea in Syria also exist.

The modern era of lighthouses began at the turn of the 18th century, as lighthouse construction boomed in lockstep with burgeoning levels of transatlantic commerce. Advances in structural engineering and new and efficient lighting equipment allowed for the creation of larger and more powerful lighthouses, including ones exposed to the sea.

The function of lighthouses shifted toward the provision of a visible warning against shipping hazards, such as rocks or reefs. The advent of electrification, and automatic lamp changers began to make lighthouse keepers obsolete. For many years, lighthouses still had keepers, partly because lighthouse keepers could serve as a rescue service if necessary.

Improvements in maritime navigation and safety such as the Global Positioning System (GPS) have led to the phasing out of non-automated lighthouses across the world. Remaining modern lighthouses are more functional and less picturesque; usually they use solar-charged batteries and have a single stationary flashing light sitting on a steel skeleton tower.

Now that the summer is winding down, readers may want to take a look at what is going on up at Mystic Seaport. In addition to viewing the gorgeous fall colors on the way north to the Seaport, you will be rewarded with a fascinating look at the harbor lighthouse that has recently been built at the Seaport.

This specific lighthouse connects with the vessels at the museum and the stories that the museum tells. Visitors can go inside the lighthouse and see “Sentinels of the Sea,” an exhibit that explores America’s lighthouses.

Did you know that the Unites States has more lighthouses than anywhere else in the world? Other interesting information, plus beautiful visuals make this a fun and educational trip.

Mystic Seaport: The Museum of American and the Sea, is the largest maritime museum in the world.

It is notable for its collection of sailing ships and boats, and for the re-creation of the crafts and fabric of an entire 19th-century seafaring village.

It consists of more than 60 original historic buildings, most of them rare commercial structures moved to the 17-acre site and meticulously restored.

The museum was established in 1929 as the “Marine Historical Association.”

Its first fame came with the acquisition in 1941 of the Charles W. Morgan, the only surviving wooden sailing whaler. The seaport was one of the first living history museums in the United States, with a collection of buildings and craftsmen to show how work was done.

Some trivia about the museum: Many readers may find it interesting that Mystic Seaport played a big role in the Hardy Boys Book #47, Mystery of the Whale Tattoo.

In 1973, many scenes of the made-for-TV movie Man Without a Country starring Cliff Robertson were filmed at Mystic Seaport and aboard the Charles W. Morgan.

In 1987, two scenes from Mystic Pizza were filmed in the Treworgy Planetarium at the museum.

In 1997, various scenes from Steven Spielberg’s movie Amistad were filmed at the seaport, and in 2005, a commercial for FedEx was shot at Mystic Seaport, based on the lobstering business in New England.

Mystic Seaport is a popular destination for boaters, who pay to dock overnight just a short walk away from ships such as the Charles W. Morgan and the fishing schooner L.A. Dunton.