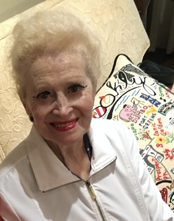 Joan Grace Lachman, died on April 7, at 89 years of age, at her home in La Jolla, California. Joan is survived by her husband, Leon and her children, Julie and Larry.

Joan was born in Brooklyn, New York, on December 17th, 1930, to Ida and Philip Kantor. Joan had one brother named Sidney. In high school, Joan received a language award and excelled in music and dance. After graduating high school, Joan attended a two-year business school and married Leon Lachman in August of 1951.

In the late 1950s, Joan and Leon lived in Switzerland before moving to Millburn, New Jersey and then in 1969, to Manhasset, Long Island. While in Long Island, Joan volunteered at St. Francis Hospital, the Nassau County Museum of Art, and in 1981 while living in the Philippines for a two year period, she volunteered at the United States Embassy Library in Manila.

Joan loved fashion. Joan loved to read. Joan loved music, theater and valued the principles of diversity and kindness as she traveled the world while developing loving relationships with the people she met. Joan was an exceptional mother and wife. She was always supportive, encouraging, kind and fully present with her children.

Joan will be remembered as being a sweet, optimistic, intelligent, loving, resilient, beautiful woman with a big heart. Our mother and wife will be deeply missed by all who knew her. A bright light and vibrant pure soul who is no longer with us. Joan’s legacy will remain in the hearts and minds of everyone who she touched. Her impact will live on forever.