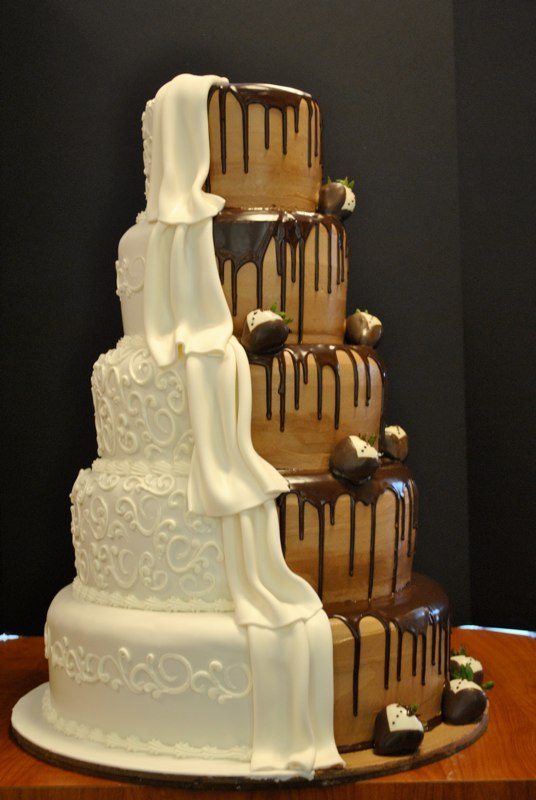 Historically, two constants at weddings are the couple getting married and some kind of cake.

There have been numerous customs around the cake at the wedding: the groom in ancient Rome crumbled a barley cake over his bride’s head (maybe that’s where the unfortunate practice of couples smushing wedding cake in each other’s faces comes from); in England, a ring was baked into the cake (which was originally a pie) — the one who found it would be married next.

One custom had unmarried girls going home with pieces of the grooms-cake wrapped in a bridal veil to be placed under her pillow so she could conjure up her husband-to-be in her dreams. It seems we have Queen Victoria to thank for the pure white wedding cakes that are still popular — she wore a white wedding gown and the cake reflected her purity and virginity.

I decided to stop by Buttercooky Bakery to find out the state of wedding cakes today.

Ben Borgognone’s Buttercooky Bakery (in Manhasset and Floral Park) produces 18 to 24 wedding cakes every weekend. Height matters, he says, with couples wanting stacked layers of cake — each layer around six inches high — in up to six layers sometimes.

Getting the cake from the shop to the venue is a major challenge. In the past when the cakes used to be tiered with a separation between each layer, the cake was brought over in sections and then assembled at the catering hall.

Borgognone enjoys meeting with the couples to work out the details.

“Sometimes what they envision won’t look good,” he says. “They might try to incorporate too many themes. We work together and come up with what will look best and sometimes less is best.”

Borgognone says that cakes covered in white rolled fondant with drapery and scroll work are popular, as well as groom’s cakes.

See more of Buttercooky’s wedding and tier cakes below (Click on pictures to enlarge).