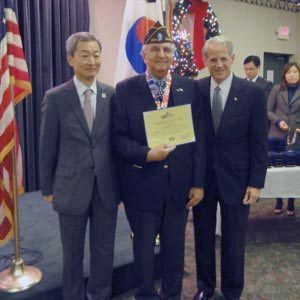 This year marks the 60th Anniversary of the signing of the United States-Republic of Korea Mutual Defense Treaty. The purpose of the forum was to introduce Ambassador Ahn Ho-young to Korean Veterans from Long Island and celebrate their important role in the community.

The medal contains a message of thanks with a ribbon featuring the Flags of all the countries that assisted the Republic of Korea.

S. Joseph Domina of Manhasset Post 304, who served in the U.S. Army during the Korean War, was a recipient of the medal and citation.