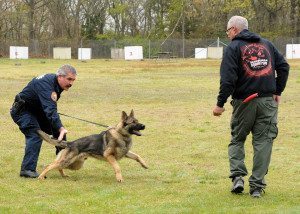 the Department’s K-9 Unit.  Once selected, the four dogs and their handlers will receive extensive training, two will be trained to detect explosives and two will be trained to detect narcotics.   The four dogs will be selected from a total of eleven dogs that came to the United States from Europe.  The remaining eight will be assigned to other public safety agencies in the future.  The NCPD’s K-9 Unit has been instrumental in locating and capturing many criminals including those accused of murder.

“Police canines are an essential part of the Police Department and their assistance has helped Nassau remain one of the safest large suburban counties in the nation,” said County Executive Mangano.  “The training that the canines as well as their handlers will undergo is rigorous and demanding, but that is how we ensure that only the best canines become members of the Nassau County Police Department.  These new dogs will assist police in hunting down drug dealers and keeping our homeland safe.”

“Each one of the police dogs that are members of our team adapt well to new and changing situations, which makes them extremely valuable to the department,” said Commissioner Krumpter.  “I would like to thank the Nassau County Police Foundation for helping to fund the purchase of two of the canines.”