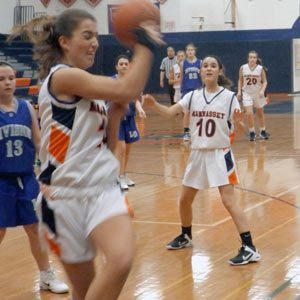 The Manhasset girls JV basketball team continued their undefeated season with a 34-10 thrashing of Division. The Indians improved to 6-0 on the season with the victory.

Alexia Terenzi led the scoring with eight points, but the real story was the complete dominance on the defensive side of the ball. Their full-court pressure wrecked havoc on Division, which was unable to establish any sort of rhythm on offense. Head Coach Tara Marsigliano was impressed with the performance but regrets her decision to play with such intensity late in the blowout.

“We probably should’ve taken off the press earlier,” said Marsigliano in regards to the team applying full-court pressure with three defenders all game. Regardless, the players executed and it was a near flawless performance by the undefeated Indians.

The halftime score was 16-6, with Manhasset dominating the pace of the game. They made it very difficult for the Blue Dragons to run plays because they were constantly forced to pass under duress and heave up shots in desperation. The rebounding on both sides of the court was strong, which created second-chance opportunities on offense but none on defense.

On offense, the team established nice tempo and balance. The low point total is a bit misleading because of the nature of the game. Much of the second half was characterized with passing the ball simply to run the clock out. For this reason the team was never really tested on offense.

The JV season does not have the pressure of a playoff race which changes the complexion of the latter part of the season, but Marsigliano feels there is much to be learned from playing at this level.

“There’s no playoff here, so it’s basically all fundamentals,” she said. “It’s about spending the time and teaching them to make layups with their left hand and how to shoot properly, rather than look for a win every time,” she concluded.

The team certainly displayed strong fundamentals in the game. It is also important that the players are preparing for the varsity level, which could come as soon as next year for some of the girls.

“We run the same plays as varsity and we have the same philosophy as far as how to treat the girls and their playing time,” said the Head Coach. “When we’re on the same page, then we’re fluent throughout the program and that’s what makes a successful program.”
The girls have performed tremendously this season, and they certainly look ready to transition to the next level whenever that time comes.