The fight for Inisfada remaining a historic landmark is over. On Thursday morning, Dec. 5, a wrecking ball commenced the demolition of the fabled 19th century edifice located at 251 Searingtown Rd. in North Hills. Shrouded in a thick fog, the demolition of Inisfada began, thus ending an era beholden to the Great Gatsby and eradicating a piece of history.

The fate of the former Jesuit-owned retreat house seems to be sealed, as a wrecking ball lashed at the 93-year-old, 87-room mansion reportedly owned by a Hong Kong developer, who has been mum on plans, the mansion, many speculate, will be totally or largely demolished to make way for high-end homes.

FEATURE: The Loss of Inisfada – Part One

When the 33-acre property went on the market last year listed at $49 million, various residents and civic associations worked to save the structure.

The Greater Manhasset Council of Civic Associations and several other organizations have worked to raise the consciousness level of the community as well as local government leaders to get the building deemed a landmark, but were unsuccessful in obtaining landmark status.

“It is a another sad day for preserving Long Island’s history,”  states Howard Kroplick, town historian for the Town of North Hempstead. “It is a shame that Village of North Hills officials, in the name of “progress,” made little attempt to save this historic and unique building.”

The property was on the market for well over a year before a buyer was found. The property went into contract in May 2013 and closed this past August for $36 million. It became one of the largest real estate transactions on Long Island in 2013.

Inisfada was originally the summer residence of Nicholas and Genevieve Brady. Built in the roaring ’20s, the Brady’s hosted many clergy as well as the Pope in their lovely home. Childless, the Brady’s gifted Inisfada to the Jesuits who used it as a retreat house. Many events were held there from religious retreats to weddings, but the cost and the ever prevalent need for maintenance made the property too burdensome to handle and forced St. Ignatius Retreat House to go on the market. 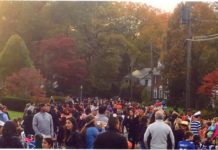