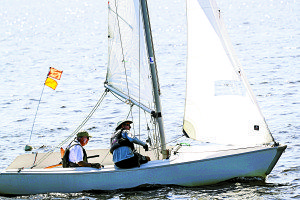 All those who race, sail or motor in western Long Island Sound know about Hart Island. But many readers may not be award of this island that is directly across from the mouth of Manhasset Bay. The island is 131.22 acres, 1 mile long, .25 miles wide and .2 square miles.

The name of the island is somewhat in dispute. British cartographers named it “Heart Island” in 1775, due to its organ-like shape. Other sources indicate that the “hart” refers to an English word for “stag.” Another version is that the island was given its name when it was used as a game preserve. Still another version has the name referring to deer that migrated from the mainland during periods when ice covered that part of Long Island Sound.

In the middle of the 19th century, the island was called Lesser Minneford Island. Oliver Delancey purchased the island in 1774 and named it Spectacle Island because the island looked like a pair of spectacles. Three owners followed Delancey: Samuel Rodman (1716-80) of Rodman’s Neck, John Hunter of Hunter Island and architect Charles C. Haight. Many boxing matches were held on the island, including the 24-round fight between Irishman James “Yankee” Sullivan and Englishman Bell in 1842. In 1869, New York City purchased the island from Edward Hunter, Bronx, for $75,000.

Over the years, Hart Island has had a workhouse, a hospital, several prisons, a Civil War internment camp (1865), a reformatory, insane asylum, sanitarium, a drug rehabilitation facility (1966-76), Nike Ajax and Hercules surface-to-air missiles (1956-74) and a small sewage treatment plant that treated about one-million gallons of wastewater per day. Today, all sanitary waste from Orchard Beach and City Island is pumped to the Hunts Point Water Pollution Control Plant located on the East River. Presently, Hart Island serves as the city’s potter’s field and is run by the New York City Department of Correction.

The island is still a great fishing spot for fluke, bluefish, porgy and striped bass. The shore habitats, as well as the weeded bluffs, give bird waters an unlimited source of pleasure. The island is also a potential breeding ground for mosquitoes and a source of floatables. The east and north shores have many derelict vessels and potential floatable debris that can be re-suspended during extreme tides and storms.

Manhasset Bay Yacht Club (MBYC) held their annual race week, which was reported in last week’s column. What wasn’t included were the Perpetual Trophies that were awarded at the end of the regatta. The winners are: