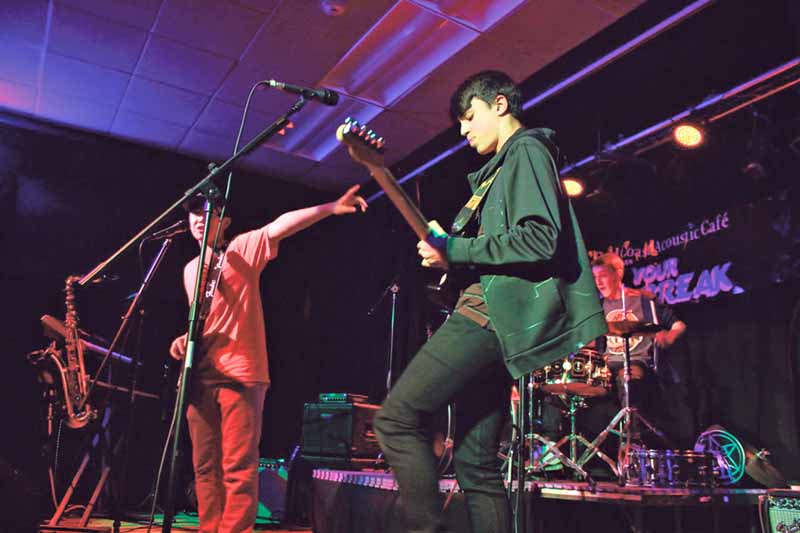 Talented and golden are the boys in the band 37 Stripes. Andrew Hahn, Oscar Cellura and Zach Levine made an incredible impression and received special recognition at the Your Big Break contest at the Gold Coast Arts Center. All Types of Kinds, a New York City-based alternative band, consisting of guitarists Billy Conahan, Ray Rubio, and Rocco Stoker, along with percussionist Berk O won the competition, but 37 Stripes won the Audience Vote.
It was a packed “standing room only” house of more than 100 to see five bands perform at the Gold Coast Arts Center in Great Neck on April 21. More than 60 Manhasset residents and 37 Stripes‑rock and roll fanatics showed up to propel the band through a blistering 20-minute set which included two original songs “Secrets & Lies” and “Uncontrolled.”

The judges specifically commented on the passion and intensity of the fans and the chemistry between the band and its supporters as a reason for their victory.

As a result, the band will be making a live guest appearance on Rick Eberle’s Radio Show “Rising Stars Radio” WHPC 90.3FM. Date and time to follow.

The band’s next live performance will be at Green’s Irish Pub on Plandome Road on Saturday, June 16.

Manhasset band members Hahn and Cellura and Syosset drummer Levine, all said in an interview after the gig that the crowd of Manhasset supporters and specifically their friends from Manhasset Middle School known as “#37 crew brought to the show incredible energy which blew the doors off the place!”

Manhasset is obviously going to hear a lot more from 37 Stripes.